bmi’s network at Heathrow evolving under Lufthansa’s guidance; 75% of ASKs now outside of Western Europe 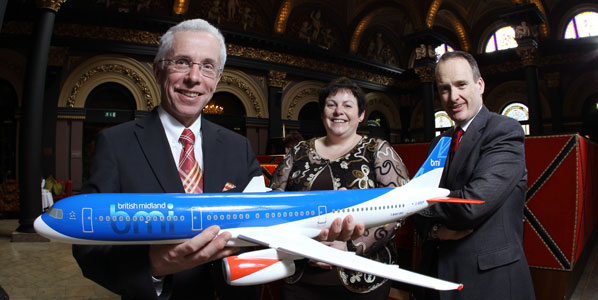 bmi’s CEO Wolfgang Prock-Schauer last month travelled to Northern Ireland where he reaffirmed the airline’s interest in the region. In Belfast, he met with Joanne Stuart, chairman of the Institute of Directors, and Howard Hastings, chairman of Northern Ireland Tourist Board. Belfast City is one of only four remaining domestic routes that bmi operates from London Heathrow as the airline gradually has reduced its domestic network.

Since Lufthansa’s acquisition of bmi British Midland (or British Midland International as it is now branded) in 2009, it has been trying to work out what to do with the airline, especially at London Heathrow, where it is the second biggest holder of landing and take-off slots after British Airways. The start of the summer 2011 season sees bmi launching five new routes from Heathrow. There are two new routes to Morocco (Casablanca and Marrakech), two new routes to Norway (Bergen and Stavanger) and a new route to Basel in Switzerland, which replaces fellow Star Alliance member Swiss’ Basel to London City service. However, one of the airline’s longest-standing routes to Glasgow terminated at the end of last month. As a result, bmi now operates just four domestic routes from Heathrow (Aberdeen, Belfast City, Edinburgh and Manchester), down from nine back in the summer of 2007. Apart from Glasgow, other domestic connections to have been terminated are Durham Tees Valley, Inverness, Jersey and Leeds/Bradford. 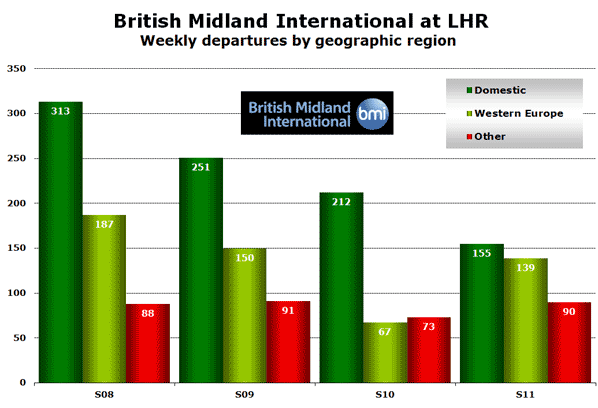 As the graph clearly shows, bmi has been cutting back on domestic flights in recent years. This summer sees a surge in flights to Western European destinations thanks to the new Norwegian and Swiss routes already mentioned, and frequency increases to Berlin Tegel and Dublin. While the number of weekly departures to non-Western European destinations from Heathrow is less than 25% of the Heathrow total, several of the destinations served then carry on to other destinations. For example, Addis Ababa (in Ethiopia) is served via Amman (in Jordan), Bishkek (in Kyrgyzstan) via Almaty (in Kazakhstan), Tbilisi (in Georgia) via Baku (in Azerbaijan), Khartoum (in Sudan) via Beirut (in Lebanon), and Damman and Jeddah (in Saudi Arabia) via Riyadh.

If ASKs are examined rather than seats or frequencies, a different picture emerges. The airline’s four domestic routes from Heathrow account for just 9% of Heathrow-based ASKs, with the airline’s seven Western European destinations (Basel, Bergen, Berlin, Dublin, Hannover, Stavanger and Vienna) accounting for a further 17%. The remaining 74% of the carrier’s weekly Heathrow-based ASKs are on its medium-haul routes to Africa, the Middle East and Eastern Europe. Many of these routes were inherited when the carrier took control of BMed (formerly British Mediterranean) back in 2007.

Earlier this year the airline started serving Tripoli in Libya. But after operating just one round trip the route was stopped after the civil unrest in the country. According to the airline’s website, flights are suspended at least until April 15, with no decision yet made about when services will resume.

Most of the routes are served by the carrier’s fleet of A320-series aircraft, but the Saudi Arabian routes are served with one of the airline’s two A330s, the other of which is currently on lease with fellow Star Alliance member Turkish Airlines. In addition, the Aberdeen and Hannover routes are operated by small Embraer jets from bmi’s subsidiary bmi Regional.

Apart from dropping several domestic routes in recent years, bmi has also pulled out of several major European city-break markets from Heathrow, including Amsterdam, Brussels and Paris. Other Western European destinations dropped in recent years include Alicante, Lyon, Madrid, Milan, Naples, Nice, Palma and Venice. Some of the airline’s longer-haul routes have also been short-lived and destinations such as Ankara, Ekaterinburg, Kiev, Mumbai and Tel Aviv have all spent only a brief time as part of bmi’s network.

One thing seems certain. Lufthansa will continue to tweak bmi’s Heathrow network as it looks to return the airline to long-term profitability.