Most of the top airports in China grow faster than the airports of equivalent size in Europe. It was not enough for London Heathrow to gain a Gothenburg service with BA, Rome Fiumicino a Kenya Airways service and Brussels from Icelandair flights. The European airports were still outperformed by Beijing, Shanghai Pudong and Hangzhou. The most notable exception is Istanbul Sabiha Gökçen, which at over 70% passenger growth grew faster than Qingdao in China. 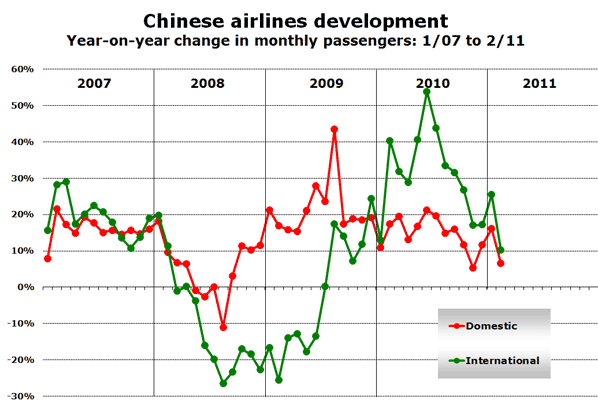 Last year saw Beijing’s international airport climb from fourth to second in the world rankings with just under 74 million passengers. A total of 51 airports across China handled more than one million passengers in 2010, with 30 of them handling over five million annual passengers. 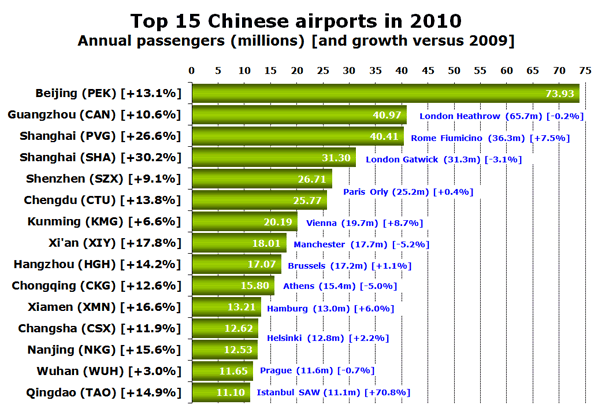 Across all Chinese airports weekly seat capacity is up 12.1% while the number of aircraft movements has risen by 14.4%. As a result, the average aircraft size has fallen from 155 seats to 152. The only airport to show a reduction in available seat capacity is Wuhan, which is currently at the centre of China’s rapidly expanding high-speed rail network. Weekly seat capacity to Shanghai Pudong (the airport’s second busiest route) is down 30% this summer. However, some of this capacity has been re-directed to Shanghai’s Hongqiao airport. Capacity to Hangzhou (which is not too far from Shanghai) is down 22%, and the number of daily flights to Enshi, less than 500 kilometres from Wuhan, has fallen from six to two.

Noteworthy new international routes to and from China starting this summer include: