Delta overtakes Southwest as #1 at Raleigh-Durham Providence in Rhode Island was the most recent airport to receive a new service from Raleigh-Durham, as Delta launched six weekly flights in the last week. Delta’s recent expansion at Raleigh-Durham has earned it the status of the airport’s #1 airline, overtaking Southwest.

Last Friday saw the launch of two new routes to Albany and Providence from Raleigh-Durham International Airport in North Carolina, both operated by Delta’s partner Pinnacle Airlines. Neither destination is currently served from the airport where Delta is now vying with Southwest to be the leading carrier in terms of passengers. In terms of aircraft movements, Delta is already the clear number one, followed by American Airlines and US Airways. Delta now operates non-stop to 19 destinations, compared with Southwest’s network of 11 routes from the airport. The airport’s only transatlantic service is provided by American Airlines, which has been operating flights to London since 1994 and now flies daily to London Heathrow. The only non-US carrier serving the airport is Air Canada, which operates three daily flights to Toronto. 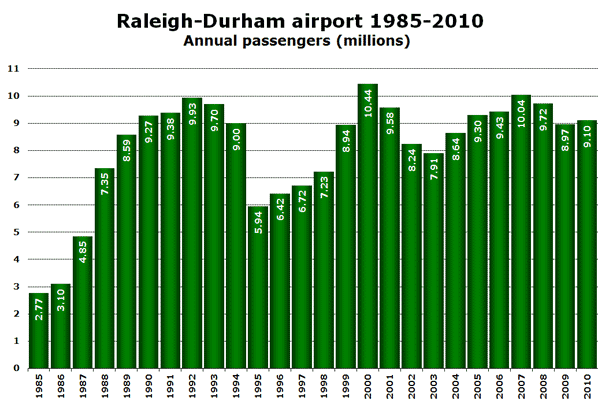 Since 1985, the airport has experienced a number of distinct phases. Between 1987 and 1994, the airport was a major hub for American Airlines, who even built their own terminal. From 1995 to 2003, Midway Airlines became the airport’s main hub carrier. Since then, Southwest has built up a significant presence and was until recently the airport’s leading carrier, accounting for just over two million passengers in 2010. Overall passenger numbers have still not quite surpassed the peak achieved in 2000. 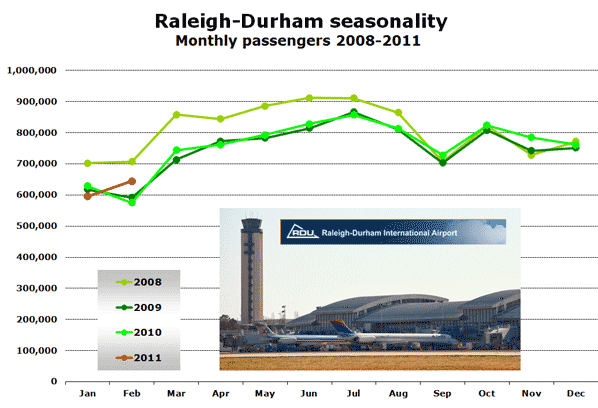 The airport’s seasonality profile is relatively flat with traffic in the peak summer month of July less than 50% higher than in the off-peak months of January and February.

Last November, Delta added five new destinations from Raleigh-Durham. It began daily flights to Columbus (Ohio), Hartford (Connecticut), Orlando (Florida), St Louis (Missouri), and Tampa (Florida). The Columbus and Hartford routes had previously been served by American Airlines, while the other three routes were already served by Southwest. Continental also started a new service back in February, offering weekly flights to Cancun in Mexico in competition with Delta.

Thanks to Southwest’s major presence (and to a lesser extent some services by AirTran and JetBlue), Raleigh-Durham’s average fare is 5.9% below the national average, according to US Department of Transportation Office of Aviation Analysis figures for the third quarter of 2010. The leading route in 2010 was Atlanta, followed by Charlotte, Philadelphia and Chicago O’Hare.

The second phase of the airport’s Terminal 2 opened to the public on 23 January this year. It features 40 shops and restaurants, eight works of art and 36 gates. Phase 1 opened in October 2008.