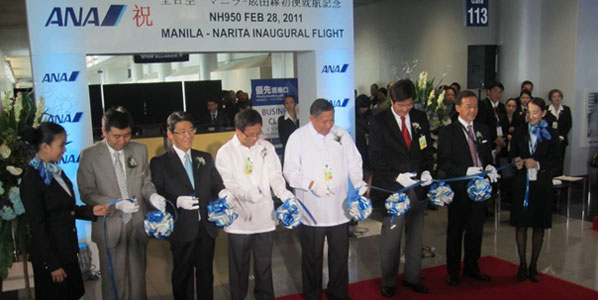 Despite the airline’s ongoing cutbacks, JAL is still the leading carrier on international routes to and from Japan. However, ANA is closing the gap, thanks in part to the introduction of a new service between Tokyo Narita and Manila, which won our Route of the Week award earlier this year.

Latest traffic data from Japan’s two dominant carriers (ANA and JAL) and the Japanese Ministry for Land, Infrastructure, Tourism and Transport shows that in 2010 domestic traffic remained virtually unchanged compared with 2009, but that international passengers transported on Japanese airlines was down around 5%. The recent tragic earthquake and concerns about health and safety after the incidents at the Fukushima nuclear facility will have had a significant impact on air traffic levels both domestically and internationally. 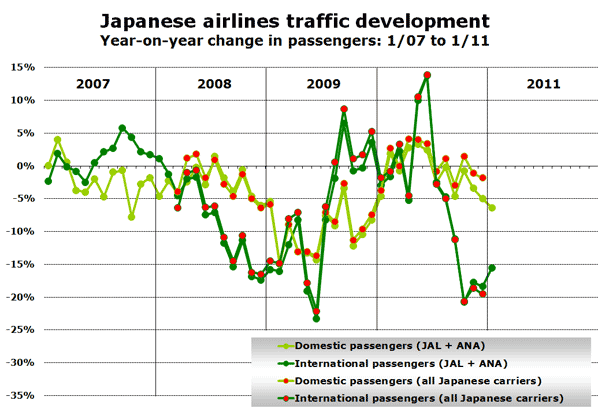 Despite its network cutbacks resulting in a falling share of the international market, JAL remains the leading carrier on international routes to and from Japan. 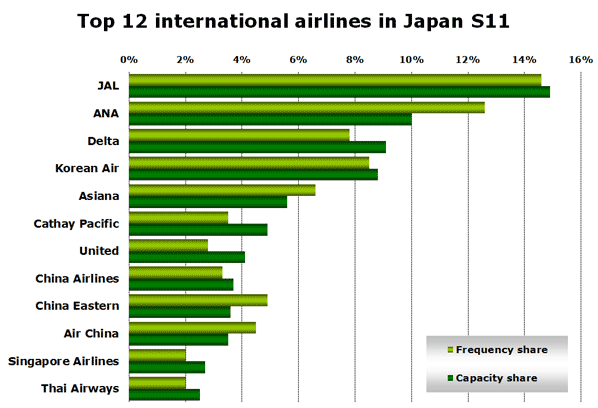 The leading European airline is Lufthansa, which operates four daily flights spread across two German airports (Frankfurt and Munich) and three Japanese airports (Nagoya, Osaka, Tokyo Narita). Air France has three-daily flights from Paris CDG (two to Tokyo and one to Osaka Kansai) while Finnair also has three daily flights from Helsinki, one each to Nagoya, Osaka and Tokyo. Analysis of schedule data reveals that in terms of ASKs (available seat kilometres) around 17% of Finnair’s entire network ASKs are allocated to its three Japanese routes.