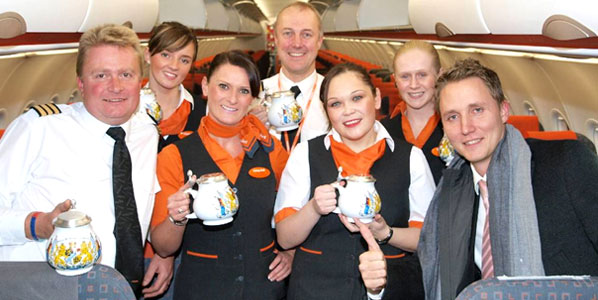 easyJet, which added Munich services from both London Gatwick and Manchester in 2009, contributed to the 10% increase in the UK-Munich market last year. In 2010, Manchester became Munich’s second-largest UK airport market, after Munich Airport’s director traffic development Oliver Dersch had welcomed the easyJet Manchester crew in November the year before.

Despite an overall decline in UK air traffic in 2010, passenger numbers to Munich from across all UK airports rose by just over 10% last year to reach a new record high of 1.93 million. This surge in passenger demand can be explained by the introduction of two new easyJet routes during 2009; daily flights from London Gatwick started in April, followed by Manchester in November. easyJet has been serving Munich from Edinburgh since 2007. 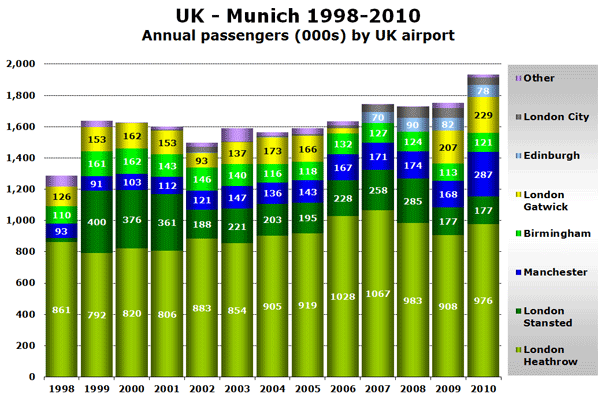 easyJet inherited a route from London Stansted when it acquired Go in 2002, the former BA low-cost subsidiary having started the route back in November 1998. This resulted in Lufthansa also starting flights to London Stansted at considerably lower fares than it was offering on its London Heathrow services, and the market grew by 300,000 passengers in 1999.

Other low-cost carriers operating from the UK to Bavaria’s biggest city in the last few years include Aer Lingus, who flew from Belfast International in 2008/09 and operated twice-daily flights from London Gatwick in 2009, and bmibaby who flew from East Midlands in 2002/03 and restarted flights last September, and Cardiff in 2003. At the end of 2007, airberlin started competing with easyJet on the London Stansted route, but the German carrier axed its flights a year later. Last March, it started serving Manchester with three-weekly flights, which along with easyJet’s services helped make Manchester the second biggest UK airport for Munich flights in 2010.

This summer, there are non-stop flights to Munich from eight UK airports, of which four are serving the London market. Lufthansa with 98 weekly departures is the leading carrier, followed by British Airways with 47 (all from London Heathrow) and easyJet with 45 (spread across four UK airports). The only other carrier is bmibaby which re-started East Midlands flights last year, while airberlin is once more no longer offering non-stop flights between Munich and the UK.