Cake of the Week Vote: Ryanair’s Liverpool to Toulon – Vote for Cake 5 Bremen Airport’s CEO Jürgen Bula and Ryanair’s Sales & Marketing Manager Germany Henrike Schmidt cut the ribbon for the route to Marrakech in Morocco, which last was operated in the winter of 2008, while a camel provided the backdrop. They were then joined by the airport’s Head of PR & Marketing Florian Kruse and the Ryanair Bremen crew Eric Hook, Tiia Hook, John Nielson, Harun Warizi, Monika Tyszkiewicz and Robert Hoeting. Ryanair’s arrival in Magdeburg/Cochstedt and thereby the launch of scheduled operations at the new airport was celebrated by Karl-Heinz Daehre, German Minister of Transport; Uwe Hädicke, CEO Airport Magdeburg-Cochstedt; and Henrike Schmidt, Ryanair’s Sales & Marketing Manager. Hädicke and Daehre were then joined by the airport’s PR Assistant Sarah Matthausch and PR Manager Gunnar Sperling for another photo opportunity. 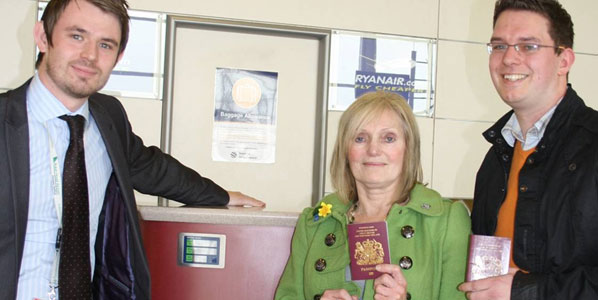 Doncaster Sheffield Airport’s Aviation Development Manager Chris Harcombe greeted the first passengers to check in for Ryanair’s new route to Faro; mother and son Val and Alex Matthews. Nick Smillie, Aviation Sales Director for Peel Airports, commented the new route: “Our Alicante route is incredibly popular and we anticipate that Faro will prove to be just as successful as we continue to build upon our growth as an airport serving South Yorkshire and the wider region.” Lappeenranta, the Finnish airport functioning as a secondary airport for St Petersburg, saw the arrival of another new Ryanair route on 30 March, when passengers from Milan Bergamo were welcomed with cake and chocolates.