To complement our lead story looking at competition between Lufthansa and airberlin, anna.aero has collected fare data for day return flights on the busiest domestic routes, for travel in three days time (Friday 15 April 2011) and for travel on a Wednesday in mid-October. For the outbound flight, a departure time of 08:00 was the target (or shortly thereafter) with the return flight departing from the other airport at around 16:00 (or as soon as possible thereafter). The fare collected was the cheapest available return fare (in euros) as displayed on the first page of the booking process. 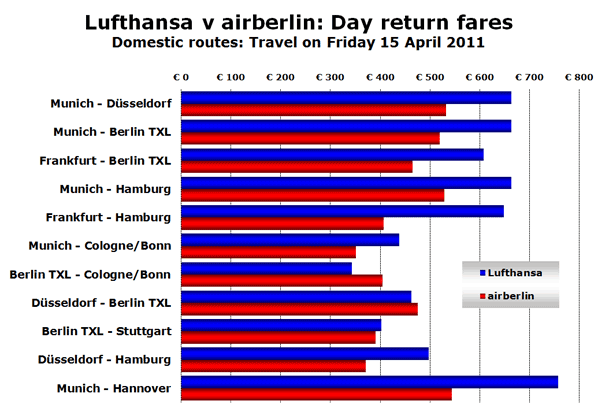 Of the 11 routes examined, airberlin is cheaper than Lufthansa on 10 of them for travel later this week, the only exception being the Berlin Tegel – Cologne/Bonn route. Taking a simple average across these 11 routes, Lufthansa’s average fare is €559 compared with €453 for airberlin, making airberlin almost 20% cheaper on average. 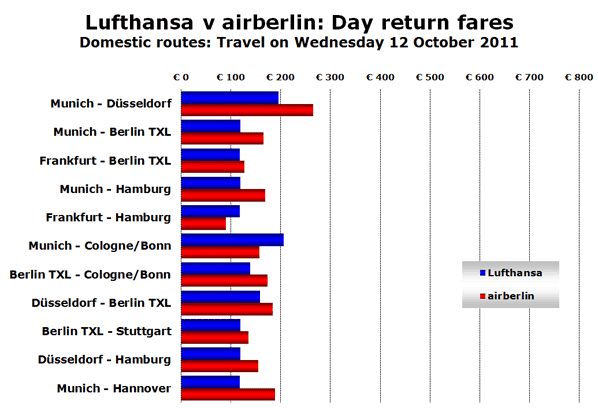 However, if fares are checked for the same flights on Wednesday 12 October 2011, a different picture emerges. Lufthansa’s average return fare is now around €139, while airberlin’s average fare is €164.50, making airberlin almost 20% more expensive.

For October travel, many of airberlin’s domestic flights were available for around €45 (one-way) but only on the Frankfurt – Hamburg route was this fare available on the flights operating at the times chosen in advance. Many business travellers (the primary audience for these routes) will belong to companies that have corporate agreements with one or other of these airlines, and the fares they pay may be completely different, but for a person working in a small company this analysis shows that depending on the route, the day of travel and how flexible they are with regard to flight times, both airlines will need to be checked carefully to find the best deal.