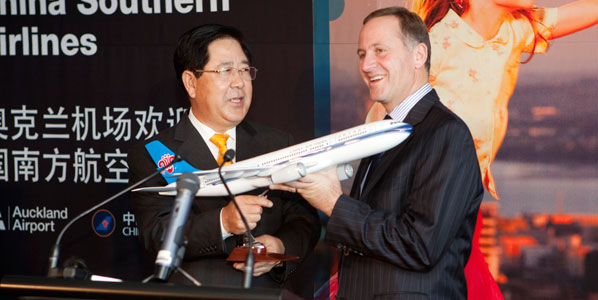 Auckland Airport this week welcomed a new non-stop thrice-weekly service from Guangzhou in China operated by China Southern Airlines, thus further emphasising its role as the international gateway to New Zealand. Passenger numbers from Mainland China increased by almost 20% in 2010, helped by Air New Zealand’s non-stop flights to both Beijing (which started in July 2008) and Shanghai.

Last year, the airport set a new passenger record handling almost 14 million passengers, up 4.6% on 2009, and an increase of 55% since 2002. Domestic traffic accounts for just 45% of all passengers and in September and October of last year, Pacific Blue withdrew its domestic flights to Christchurch, Dunedin, Queenstown and Wellington, which the airline had started in November 2007. These new routes had resulted in domestic traffic at Auckland growing by almost 11% in 2008. Fortunately, Qantas’ low-cost subsidiary Jetstar began domestic routes from Auckland in 2009. 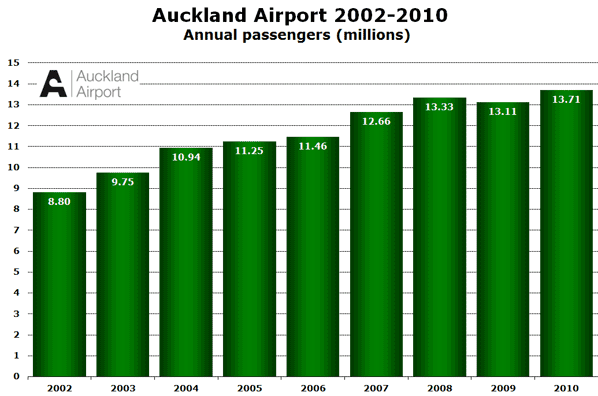 No European or US carriers serve Auckland at present

Based on country of last residence, the leading generators of international traffic are visitors from Australia, the United Kingdom, the USA and China, with China showing the fastest growth. Despite the number of American and British visitors, no airline from either of these countries operates to Auckland. However, the US is served non-stop from Auckland by Air New Zealand (to Honolulu, Los Angeles and San Francisco) and Qantas (to Los Angeles). Air New Zealand also serves just one airport in Europe, London Heathrow, via both Los Angeles and Hong Kong.

Asian carriers are well represented at the airport with Cathay Pacific, China Airlines (which started flights to Taipei via Brisbane back in January), Korean Air, Malaysian Airlines, Singapore Airlines and Thai Airways all serving their home hubs. Two South American carriers are also present with Lan Airlines serving Santiago in Chile, and Aerolineas Argentinas serving Buenos Aires. Both of these carriers use Auckland as an intermediate stop for their services to Sydney.

However, the foreign carrier with the biggest presence in Auckland (excluding Qantas and its low-cost subsidiary Jetstar) is Emirates. The Dubai-based carrier operates three daily flights to Dubai, but each has an intermediate stop in Australia; one in Brisbane, one in Melbourne and one in Sydney.

During the last two years, the following new routes have been added at Auckland. The most significant development has been Qantas’ decision to use its low-cost subsidiary Jetstar to take over its three domestic routes to Christchurch, Queenstown and Wellington in June 2009, which may well have contributed to Pacific Blue’s decision to withdraw from those markets just over a year later.