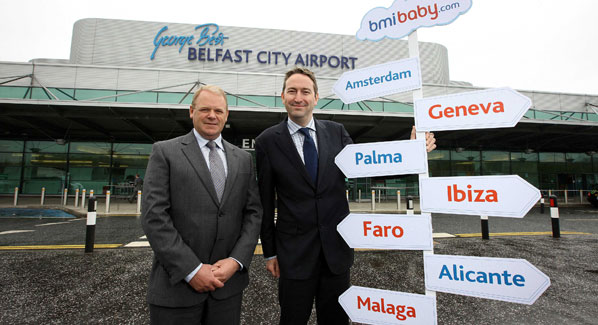 Brian Ambrose, CEO George Best Belfast City Airport, and Julian Carr, managing director bmibaby, earlier today celebrated the announcement of the low-cost airline’s international expansion at the Northern Ireland airport. Although the first route, to Amsterdam, launches in October this year, the majority of flights will launch next summer.

At the beginning of 2011, bmibaby transferred all its domestic services from Belfast International Airport to Belfast City Airport. This comprised four routes from its UK bases in Birmingham, Cardiff, East Midlands and Manchester with a total of 48 weekly departures. The airline’s first flights to London Stansted began at the end of March.

Today, the airline has announced plans to start seven international routes from the airport starting this October with Amsterdam, followed by Geneva in December. In March 2012, there will be new routes to Alicante, Faro, Malaga and Palma de Mallorca, with Ibiza flights starting in May.

As the table above shows, all of these destinations are already served by carriers from nearby Belfast International Airport. Previous attempts to operate international services from Belfast City Airport have been hampered by the length of the runway (1,829 metres) requiring larger single-aisle aircraft to operate on a payload-restricted basis.

Julian Carr, bmibaby’s managing director, said: “We are committed to flying from Northern Ireland and will base two additional aircraft at Belfast City Airport in order to offer a more comprehensive flying programme. bmibaby will be the only low cost airline to operate the new routes directly from Belfast City Airport and this will make getting away for a sunshine, ski or city break more accessible from Northern Ireland. The new routes build on our recent launch of the Belfast City to Stansted service, and the relocation from Belfast International Airport to Belfast City Airport. Our new European flights perfectly complement our existing offering and bmi’s strategically important Heathrow service. We are proud to offer people even more choice and flexibility plus great bmibaby service and low fares.”

Welcoming the bmibaby decision, Brian Ambrose, George Best Belfast City Airport’s CEO, said: “This is the most significant announcement in Belfast City Airport’s recent history and is a welcome reward to all the staff who work tirelessly to make this airport world class. Direct European routes have long been an ambition of this airport and we believe strongly that our growing customer base throughout Northern Ireland will avail of the bmibaby services. These are exciting times for Belfast City Airport and the wider tourism and local economy, especially ahead of the Titanic celebrations in 2012.”