Competition grows between Lufthansa and airberlin; going head-to-head on 20 routes at both Munich and Düsseldorf 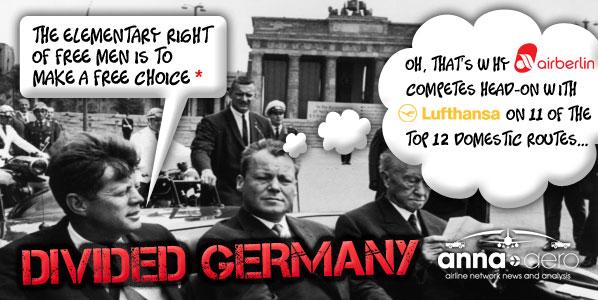 Germany’s two biggest carriers, Lufthansa and airberlin, appear to be focusing on consolidation at present after both airlines went through a period of acquiring other airlines. While Lufthansa concentrates on making some of its new subsidiaries profitable (for example Austrian and bmi), airberlin is gearing up for membership of the oneworld alliance, having already become a member of the Association of European Airlines (AEA) earlier this year.

With Ryanair having abandoned the German domestic market and TUIfly having delegated its domestic operations to other carriers, Lufthansa (and its low-cost subsidiary germanwings) and airberlin now operate a virtual duopoly within Germany, accounting for 98% of domestic seat capacity and 93% of domestic flights. Lufthansa and germanwings combined have a 66% share of the German domestic market, making it still twice as big as airberlin. 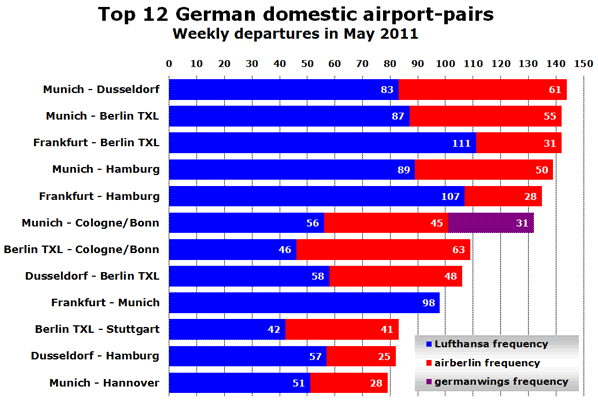 For consumers, the good news is that airberlin competes head-to-head with Lufthansa on 11 of the top 12 domestic routes, leaving Lufthansa with a monopoly on just one; Frankfurt to Munich. On ten of the remaining 11 routes, passengers can choose between just these two airlines, but on Munich – Cologne/Bonn, germanwings also becomes a viable option. To see how day return air fares compare across some of these routes, please see this week’s farewatch.

While competition on domestic routes now is well-established, competition between the two carriers on international routes is less well developed. Analysis of the number of destinations served by each airline from the top 14 German airports shows that while Lufthansa remains dominant at Frankfurt and Munich, airberlin serves more destinations than Lufthansa from nine of the 10 remaining airports where the carriers have a presence. 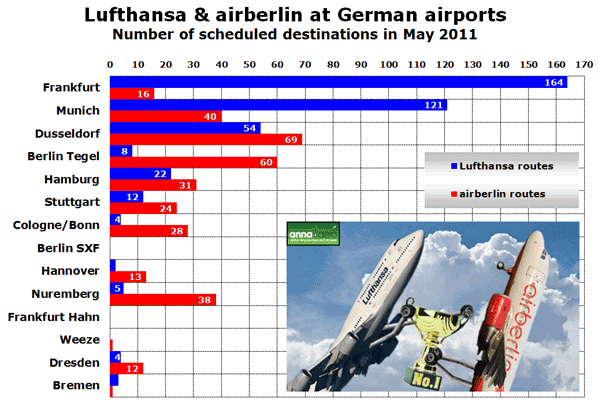 Direct competition between Lufthansa and airberlin is gradually increasing. The following table shows the routes on which the two carriers will be competing this summer and with what weekly frequency.

Competition between the two airlines is greatest at Düsseldorf and Munich, where the two carriers compete head-to-head on 20 routes. In Munich, the 20 routes consist of seven domestic routes, six routes to Italy, two routes to Spain and five further routes, while at Düsseldorf the 20 routes comprise six domestic routes, five Italian routes, three Spanish routes, and six further routes.

The only non-European routes on which Lufthansa and airberlin compete head-to-head at present are on Düsseldorf – Miami, Munich – Cairo, and Munich – Tel Aviv. As and when airberlin or Lufthansa launch additional new routes to compete with each other (or anyone else for that matter), anna.aero will be there to report on the celebrations.