Hawaiian Airlines in January began serving Seoul Incheon, a new service that helped the airline become the fastest-growing major US carrier this year, ahead of runner-up Alaska Airlines.

The latest data from the leading US carriers shows that all of them (except United) reported traffic (measured by system RPMs – Revenue Passenger Miles) growth in February and March. For the fourth month in a row Alaska Airlines and Hawaiian have reported the fastest growth, while Allegiant Air after reporting RPM growth of almost 14% in January grew by less than 1% in February. After four successive months of double-digit RPM growth Southwest saw its demand grow by 9.8% in March. 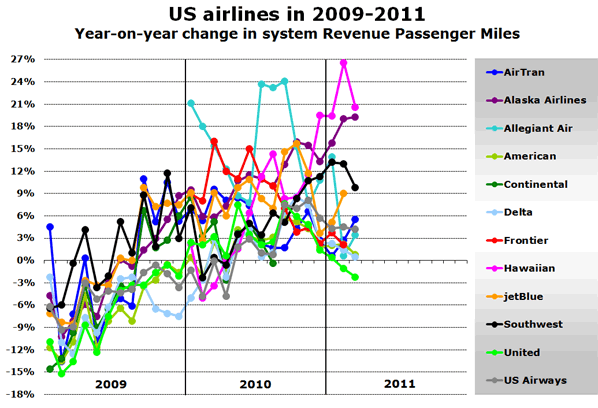 A close look at the four remaining ‘legacy’ carriers (American, Delta, United, US Airways) shows that only US Airways is currently generating significant growth. As the ‘new’ United continues to rationalise its network, American and Delta both reported RPM growth of less than 1% in March while US Airways grew by 4.2%, with domestic RPMs up just over 5%.

Whereas in January eight of our 11 airlines reported a year-on-year improvement in load factor, this fell slightly to seven out of 11 in February. With jetBlue yet to report March figures the number of airlines with improved load factors in March has fallen to just four, Alaska Airlines (up 2.9 points), Allegiant (up 1.2 points), Southwest (up 0.6 points) and US Airways (up 0.3 points). 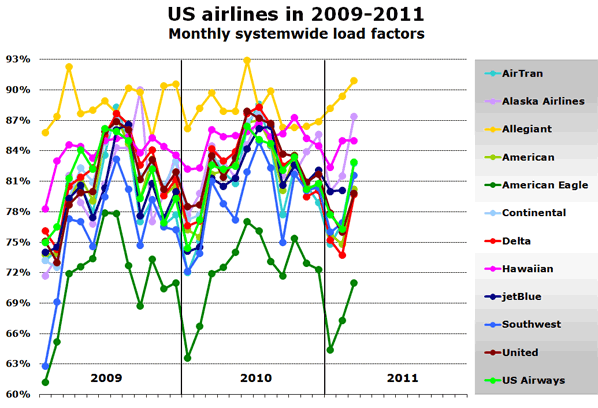