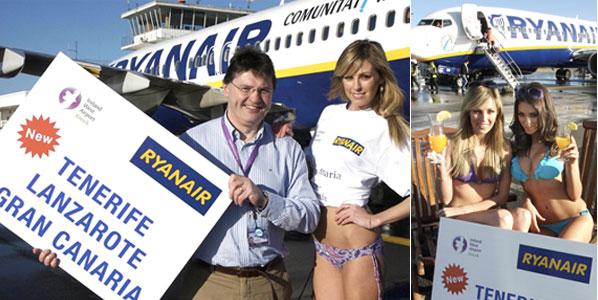 One of the airports that this week got connected with Ryanair’s new Lanzarote base is Knock in Ireland. It joins three other Irish airports, however, the low-cost airline’s route network from the Canary Island is dominated by services to the UK and domestic flights to the Spanish mainland.

When Ryanair began flights at the end of October 2009 to the airport close to the town of Arrecife on the Canary Island of Lanzarote, it instantly became the biggest foreign carrier at the airport. A total of 16 routes were launched within a matter of days from various Ryanair bases across Europe. According to AENA data, during 2010, Ryanair carried over 600,000 passengers through the airport at an average flown load factor of just under 81%. As a result, traffic at the airport grew by 5.0% last year to 4.94 million passengers, a figure which is still lower than what the airport was managing a decade previously. 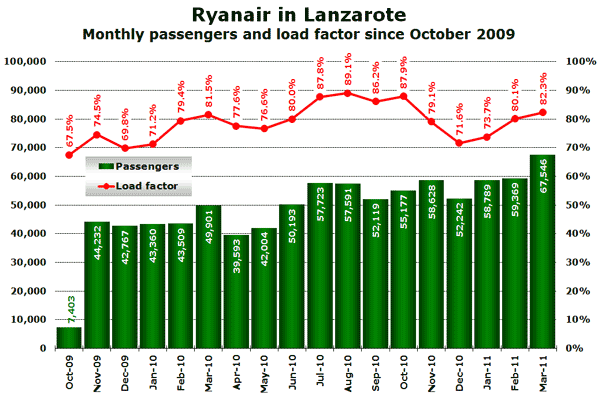 For all of last summer, the average load factor on Ryanair flights at the airport was between 80% and 90%, and since the start of operations, only twice has the load factor fallen below 70%, in October 2009 when services began and in December of the same year. Last month, Ryanair had its best month yet, carrying over 65,000 passengers for the first time at a load factor of 82.3%. At some point in May, it appears likely that Ryanair will carry its one millionth passenger at the airport.

Last week saw Lanzarote become an official base for Ryanair, which has enabled the airline to start eight new routes to non-base airports (Eindhoven, Karlsruhe-Baden, Knock, Santander, Santiago de Compostela, Vallodolid, Venice Treviso and Zaragoza), and additional routes to its bases in Leeds/Bradford, Milan Bergamo, Seville and Valencia. Destinations served this summer by Ryanair from Lanzarote are summarised by country in the following table.

UK routes dominate the international network, with the Edinburgh route clocking in at a lengthy 3,100 kilometres. None of the airline’s Nordic bases are linked to Lanzarote at present. Flights from Stockholm Skavsta or Kaunas would be over 4,000 kilometres. The carrier’s longest sector at present is from Billund to Tenerife Sur, which clocks in at just under 3,700 kilometres.

Only Madrid served daily; competes with three other carriers

The vast majority of Ryanair’s routes from Lanzarote are served with between just one and three weekly frequencies. The one notable exception is Madrid, which is served with 10 weekly flights (daily plus extra flights Monday, Friday and Saturday), and competes with daily flights from Air Europa, Iberia (about to be replaced by Vueling) and Spanair.