Aeromexico is one of two airlines that have resumed the international route between Guadalajara and Fresno, California that was left unserved after Mexicana’s demise. In spite of the loss of Mexicana, which had a 30% share of the Mexican market, the country’s traffic has only experienced a small decline.

Despite the demise of Mexicana at the end of last August, Mexico’s domestic traffic fell by less than 2.5% each month between September 2010 and January 2011. In February, traffic was even up year-on-year (by 0.5%) as Mexico’s other carrier’s added domestic capacity. It is worth remembering that for much of 2010, Mexicana and its affiliates MexicanaClick and MexicanaLink had a combined market share of almost 30%. 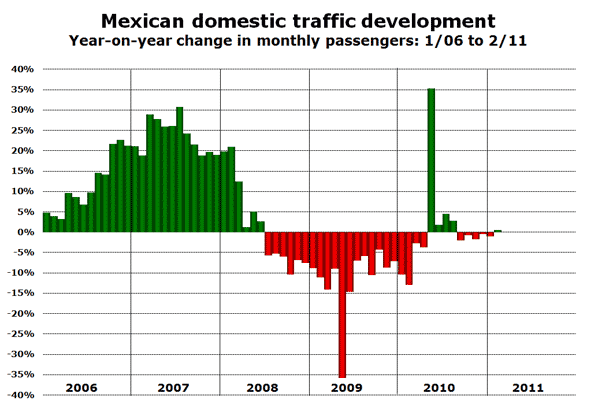 So which carriers have gained most from the disappearance of Mexicana? In terms of domestic market share, Aeromexico appears to be the biggest winner. From having a 32% share of the market in June (when combined with Aeromexico Connect), its combined share rose to over 45% in September, October and November, before falling back to 42% in the first two months of 2011. 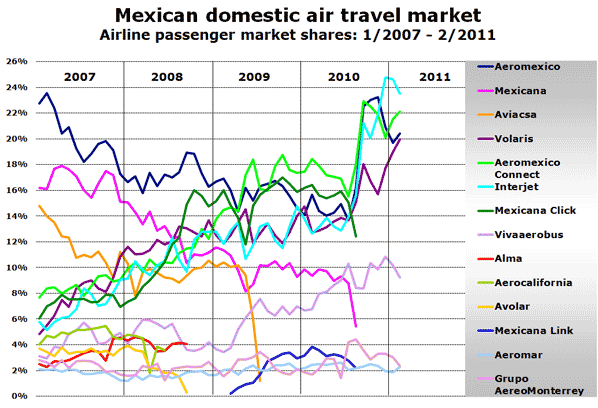 Among the three major LCCs (Interjet, vivaaerobus and Volaris), Interjet has made the biggest market share gains, growing from 13% in June to around 24% in 2011. Volaris’ share has grown from around 14% in June to 20% in February, while vivaaerobus has remained virtually unchanged at between 9% and 10%.

Between 1 March and 1 April, vivaaerobus started nine new domestic routes from Mexico City Airport, increasing its network from the country’s busiest airport from eight to 17 destinations. All of these routes are served at least daily.

Meanwhile, Aviacsa (which ceased operating in July 2009) appears to be planning a resumption of services on 2 May. According to the airline’s website, it will start serving six destinations (Cancun, Monterrey, Oaxaca, Tapachula, Tuxtla Gutierrez and Villahermosa) from Mexico City from that date, with two further routes starting in June. Back in early 2007, Aviacsa had as much as 15% of the domestic market, but a year later, this had fallen to 10%.

International traffic down 3%-5% this winter

Mexicana’s demise has been felt rather more in the international market. Although demand was still up year-on-year in both September and October, since November (the start of the winter season), international passenger numbers have fallen by between 3% and 5%. 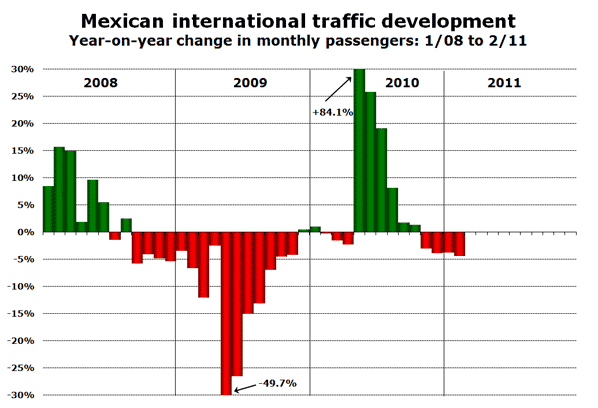 This week has seen the start of two new international services operated by Volaris; from Guadalajara to Fresno (Aeromexico started the same route at the beginning of April), and from Monterrey to Los Angeles. A daily service from Guadalajara to Las Vegas was started by the airline on 30 March.