A funny thing happened in February (and again in March) without anybody noticing (until now). None of Europe’s top six LCCs (easyJet, germanwings, Norwegian, Ryanair, Vueling, and Wizz Air) reported growth of more than 15%. This is the first time this has ever happened and may indicate a significant tipping point in the future development of Europe’s low-cost market as it coincides with rising fuel prices, increasing taxation and the effect of on-going European economic difficulties and their effect on disposable income, the key driver of demand for Europe’s low-cost airlines. 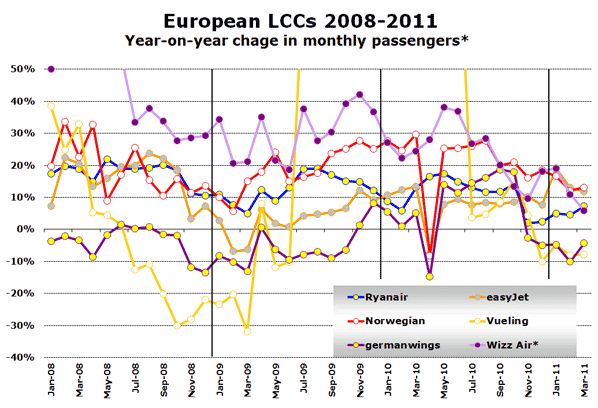 Source: Airline * Wizz Air figures are capacity growth derived from OAG data. This also helps explain why there is no dip in their figures for April 2010. NB: Ryanair’s figures of April 2010 are based on passengers who were booked to fly. Around 1.2 million Ryanair passengers were unable to fly in April due to the closure of air space following the Icelandic volcano eruption.

In 2010, Europe’s six biggest low-cost carriers (hereafter referred to as the ELC6) carried around 165 million passengers. All six of these carriers reported traffic growth in 2010 ranging from 8% for easyJet (to 49.7 million) and Germanwings (to 7.7 million) to 11% for Ryanair (to 72.7 million), 21% for Norwegian (to 13.0 million), 23% for Wizz Air (to 9.6 million), and 35% for Vueling (to 11.0 million), although Vueling’s high growth is heavily influenced by its merger with clickair in 2009. So far in the first quarter of 2011, two of the ELC6 have not grown, with both germanwings and Vueling reporting year-on-year falls in passenger since last December. Meanwhile, Ryanair has now gone five straight months recording growth of less than 10%, something that was previously unheard of.

As a comparison, the 33 airlines belonging to the AEA transported 261 million passengers in 2010 (at a load factor of 70%) on domestic or European cross-border services.

Lots of new routes but how much growth?

anna.aero’s new route database is stuffed full of new routes being started by the ELC6 airlines. This week alone, Ryanair is starting over 40 routes, Norwegian is starting three routes from its new base in Helsinki, germanwings is adding four new Italian routes from three German airports, Vueling is starting four new routes, Wizz Air is launching eight routes from its new base in Vilnius, while easyJet is adding Seville to its network for the first time. It should be noted that most of these new routes are being started at ever lower average weekly frequencies (usually just two to four flights per week), meaning that the routes rely almost entirely on discretionary leisure demand.

At the same time, however, some of these carriers are cutting back services. Ryanair is cutting flights and routes from Girona and Alicante, has been reducing flights to and from Germany (because of the new ‘eco-tax’ introduced on 1 January), has dropped its Marseille base because of French employment law issues and has generally been cutting routes and flights in the UK and Ireland, citing taxation as the main reason (although a downbeat economy in these countries doesn’t help). easyJet recently announced that it would be ending flights to Helsinki (just as Norwegian introduces them) and the airline’s new CEO Carolyn McCall recently stated that further network cuts could be expected if fuel prices remained high, impacting demand.

However, there is also some good news. Norwegian has just opened a base in Helsinki, Wizz Air has opened bases (each comprising just one aircraft) in Belgrade and Vilnius in the last two weeks, Vueling is starting a base in Toulouse next week and taking over some Iberia services from Madrid, and easyJet is opening a base in Lisbon later this year, while also having recently started flights to Amman in Jordan. Ryanair has focused its growth recently on the Canary Islands, targeting the traditional charter market and pushing up its average sector length. It is also growing in Greece (another traditional charter market). Although longer sector lengths are good at bringing down unit costs, fuel costs then represent a higher proportion of the total cost.

What about Europe’s second tier of LCCs?

Other well-established but smaller LCCs in the European market are also evolving their network strategies. bmibaby, which launched in 2002 and carried around 2.3 million passengers in 2010, has recently announced that it is closing its operations in Cardiff and Manchester at the end of this summer, but adding capacity and routes at Belfast City, Birmingham and East Midlands. Another UK LCC, Jet2.com, grew by 26% last year as it launched a base at East Midlands (after easyJet withdrew) and has recently started a base in Glasgow and expanded at Newcastle (as easyJet contracts).

In mainland Europe, Dutch LCC/charter airline Transavia.com has abandoned its experiment of operating a base in Copenhagen, but is launching a raft of new routes starting this week from Eindhoven and Rotterdam.

anna.aero will continue to monitor the growth (or otherwise) of 50 of Europe’s leading airlines (in our new European Airline Traffic & Trends Database) and report on all new routes launched as well as tracking and identifying those services that are no longer considered viable.