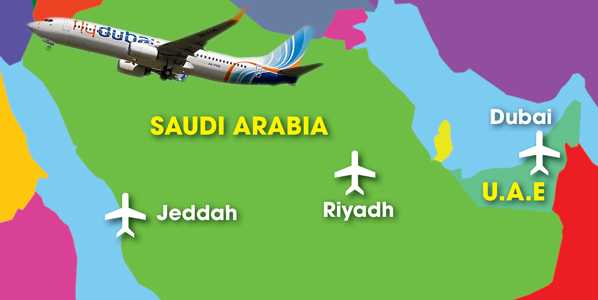 As flydubai adds Saudi Arabia’s two major cities to its network out of Dubai, the airline enters a highly competitive market with both network and low-cost competition.

From 1 May, the fast-growing Dubai (DXB) based low-cost carrier flydubai expands its network to Saudi Arabia with two major new routes. The airline, which already serves the regional destinations Abha, Gassim and Yanbu in the Kingdom of Saudi Arabia, will add daily flights to the country capital Riyadh (RUH) and four flights a week – on Mondays, Thursdays, Saturdays and Sundays – to the country’s commercial capital Jeddah (JED).

flydubai’s delighted CEO Ghaith Al Ghaith commented: “These cities are of prime importance in this region and we are honoured to have the opportunity to serve the Saudi people in Riyadh and Jeddah. I would like to take this opportunity to thank the Saudi authorities for their support and assistance in making these flights possible.”