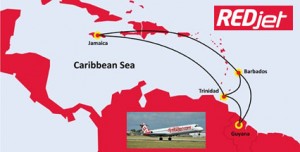 Details were unveiled last week of the operational plans for REDjet, whose slogan is “The Caribbean’s low-fares airline”. Services will start on 8 May with flights between Barbados and Trinidad, followed within days by three further routes. The airline has acquired two former American Airlines MD-82s, which have been kitted out with 149 seats, giving a comfortable seat pitch of 33 inches, and both of these aircraft will be based in Barbados.

The airline has so far announced and put on sale four non-stop routes within the Caribbean. Fares are from US$9.99 (excluding taxes) and the airline claims that its average fares will be up to 60% lower than those of the competition. It will operate from four airports; Bridgetown (BGI) in Barbados, Georgetown (GEO) in Guyana, Port-of-Spain (POS) in Trinidad, and Kingston (KIN) in Jamaica. The airline’s initial routes are summarised below along with competitor information.