Eastern Airways’ regional operations rank the airline fifth in the domestic market from Scotland. Just last week, the airline’s 10th anniversary of the service between Aberdeen and the Highlands town of Wick was celebrated with a cake by Trudy Morris, CEO Caithness Chamber of Commerce and chair of the Wick Airport Consultative Committee; Kay Ryan, Eastern Airways’ commercial director; and Carol Benzie, Aberdeen Airport’s operations director.

Since anna.aero last looked at the Scottish aviation market in early 2008, the country’s airports have seen year-on-year falls in traffic levels in 2008, 2009 and 2010. While this is no great surprise, given that UK airports as a whole saw demand decline, Scotland’s four biggest airports combined (Aberdeen, Edinburgh, Glasgow International and Glasgow Prestwick) shrank faster than the UK average. In 2008, these airports saw passenger numbers drop by 3.1% (UK as a whole 1.9%), 7.9% in 2009 (UK down 7.2%), and 7.2% in 2010 (UK down 3.4%). The three largest of these four airports are all operated by BAA, although not for much longer, as the company has been informed it must divest itself of either Glasgow International or Edinburgh, in a similar way that it was forced to sell off London Gatwick. 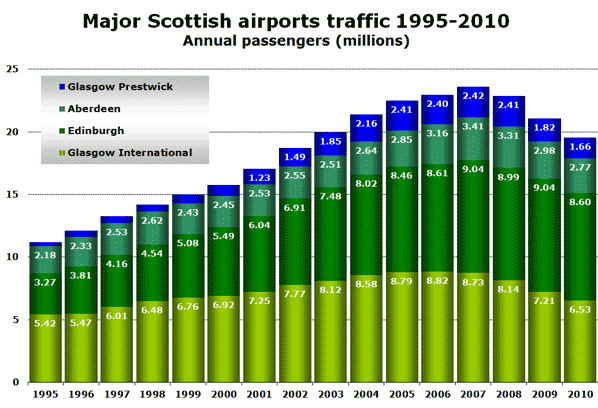 One of the reasons for Scotland’s below par performance in 2010 was the demise of Flyglobespan, a Scottish-based low-cost/charter hybrid that began operations in April 2003, but ceased operating just before Christmas in 2009.

Three years ago, our analysis showed that British Airways was still the leading airline on domestic routes from Scottish airports. It still serves London City, London Gatwick and London Heathrow from both Edinburgh and Glasgow, but now ranks only third in terms of scheduled domestic seat capacity. 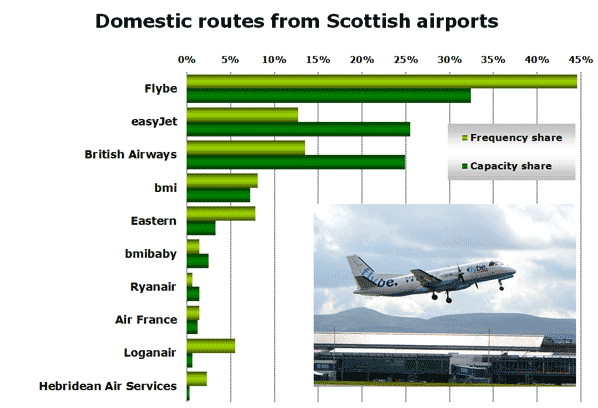 Loganair, despite operating mostly as a franchise carrier for Flybe, still operates a number of niche routes under its own name, using 8-seat Britten-Norman Islanders. These are all PSO (Public Service Obligation) routes, supported by government funding.

Ryanair has two bases in Scotland; at Edinburgh and Glasgow Prestwick. It has more than doubled the number of routes operated in the last three years, although seat capacity has only grown by around 60%. easyJet continues to develop its operations in particular from Edinburgh, from where it added new routes last year to Cologne/Bonn, Lisbon and Paphos. 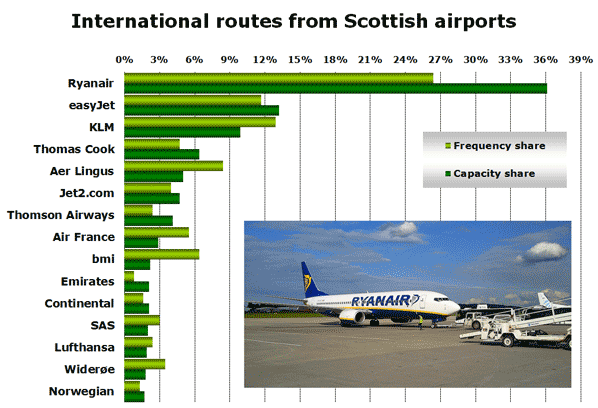 Although easyJet is the #2 carrier in both the domestic and international markets, it ranks #1 overall as Flybe operates no international flights (yet) and Ryanair has just two domestic routes. easyJet is also starting five new routes from Scottish airports this summer (and winter) including a new daily service between Aberdeen and London Gatwick starting in June.

One notable planned new route is a twice-weekly service linking the oil cities of Aberdeen and Baku (in Azerbaijan) with Azerbaijan Airlines slated to start non-stop operations on 22 May.