Fresno regains Guadalajara link thanks to AeroMexico and Volaris; American and United compete on #1 route to LAX In the last few weeks, Fresno in California has welcomed two new airlines to fill the gap left by Mexicana's demise last August. Both AeroMexico and Volaris now operate each daily (unlike what we initially reported) to the airport by Yosemite National Park from Guadalajara, and AeroMexico is keen to start flying from Mexico City as well.

Fresno Yosemite International Airport in California recently welcomed not one, but two new foreign carriers, although both are serving the same destination, Guadalajara in Mexico. AeroMexico began daily flights on 4 April and was joined on 14 April by Volaris which also launched the route with daily flights. The Volaris service leaves Guadalajara at 21:15 and arrives in Fresno at 23:05 local time. The aircraft spends a couple of hours on the ground before departing Fresno at 01:00 in the morning arriving back in Mexico at 06:30 local time, helping to maximise aircraft utilisation. The destination had previously been served by Mexicana until the airline’s collapse last August.
Fresno’s airport, which promotes itself as the gateway to Yosemite National Park, handles around 1.2 million annual passengers with nine domestic destinations currently served by a range of carriers. Alaska Airlines serves Portland (Oregon) and Seattle, Allegiant Air serves Las Vegas, American Airlines links to its bases in Dallas/Ft Worth and Los Angeles, and Delta has three daily flights to Salt Lake City. 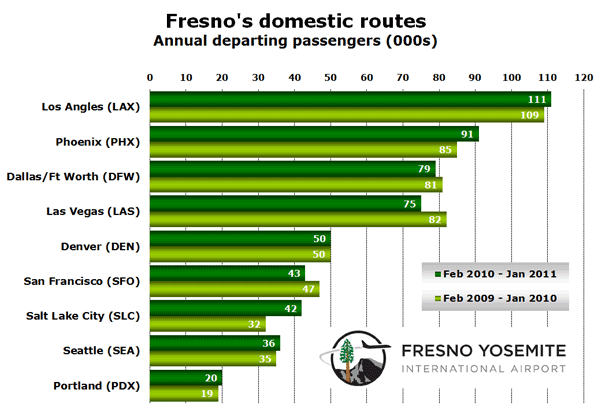 US Airways also serves Las Vegas as well as Phoenix, while United is the leading airline at the airport with connections to Denver, Las Vegas, Los Angeles, and San Francisco. Most of these domestic routes are operated by partner airlines using regional jets or turboprops, but American Airlines uses mainline jets on its DFW service, while Allegiant uses an MD80 on its Las Vegas service.

Earlier this month, the US DOT apparently approved an application by AeroMexico to offer flights between Mexico City and Fresno. The airline wants to begin flights by the beginning of June, but as yet no official route announcement has been made.