Indian domestic traffic up 21% in Q1 2011; Kingfisher and IndiGo neck-and-neck with almost 20% each of market 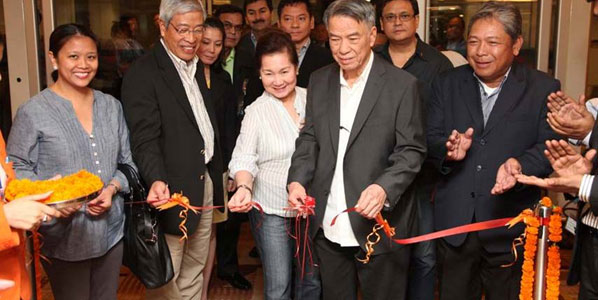 While the Indian domestic market grows faster than international traffic, the country gained an historically important new international service at the end of March, when Philippine Airlines connected the two Asian nations with its service between Manila and Delhi.

Latest data from the Indian DGCA (Directorate General of Civil Aviation) confirms that India’s domestic air travel market continued to show impressive growth in the first quarter of 2011, with passenger numbers up 20.9% to 14.33 million passengers. March traffic was up 23.5% to 4.82 million passengers. 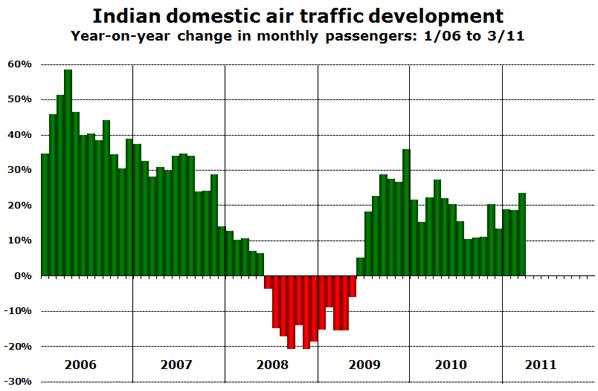 Market share statistics for March 2011 (also from the DGCA) show that Kingfisher (19.9%) is just holding off IndiGo (19.5%) as the leading individual airline, although if the figures for Jet Airways (17.5%) and JetLite (7.9%) are combined, then the Jet Airways group of airlines is still way out in front with 25.4% of the market. The remaining market shares belong to Air India (14.9%), Spicejet (13.5%) and GoAir (6.8%).
DGCA figures for March also show that IndiGo had the lowest cancellation rate of any airline in the domestic market (0.2%), with JetLite faring worst (2.4%), while the overall average was 0.9%.

Figures from the Airports Authority of India show that international traffic passing through the country’s airports in January was up 7.4%, while in February this improved to 9.7%. 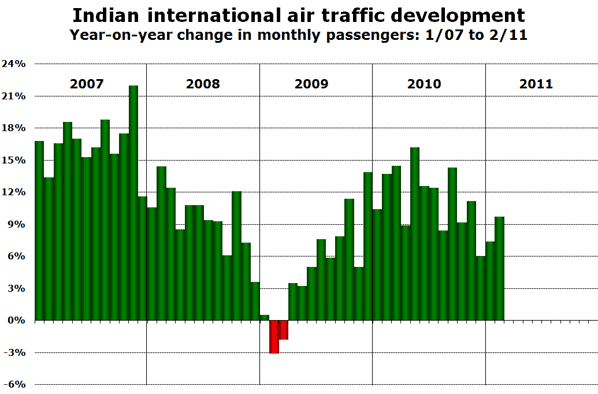 New international services which are planned to start in the coming months include Ethiopian Airlines connecting Chennai with Addis Ababa (via Mumbai) from the beginning of May, and Qatar Airways making Kolkata its 12th Indian destination when it begins daily A320 flights from Doha on 26 July.