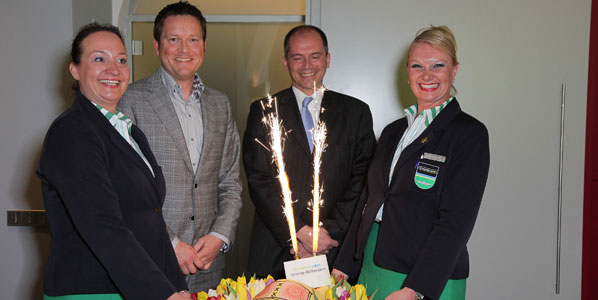 Transavia.com's expansion at Dutch regional airports reaches beyond the low-cost airline's main Amsterdam network. Last week, it launched new routes from Rotterdam to the brand new destinations Milan Malpensa, Prague and Vienna, of which the airline's arrival in the Austrian capital was a particularly sparkling affair.

The last week has seen Transavia.com launch more new routes than any other airline, as the Dutch carrier consolidates its position at home airports away from its main base in Amsterdam. Having launched a base in Copenhagen at the end of 2008 (after the collapse of Sterling left a gap in the market), Transavia.com pulled the plug on the Danish operation at the end of the recent winter season. Instead, it has decided to broaden its network from Eindhoven, Groningen and Rotterdam in the Netherlands.

Over 60 routes from Amsterdam this summer

Amsterdam remains the airline’s biggest base of operations from where it serves over 60 destinations this summer, including new services to Athens (already served by KLM and Olympic Air) and Lisbon (already served by KLM and TAP Portugal). The biggest change comes at Rotterdam where Transavia.com will this summer begin new services to Biarritz, Madrid, Milan Malpensa, Montpellier, Prague and Vienna. It will also welcome back the service to Toulon, which had shifted to Amsterdam last summer. The Biarritz and Montpellier services were also operated last summer from Amsterdam and have been moved to Rotterdam for this season. Athens, Lisbon, Madrid, Milan Malpensa, Prague and Vienna are all new destinations for the airline, although Madrid has been served from Amsterdam in the past.

Transavia.com’s network from Eindhoven expands from eight to 11 routes this summer with the addition of daily flights to Barcelona and Nice, and the introduction of three weekly flights to Ibiza. Last winter, when all of these route announcements were first made, Willem Hondius, Commercial Director of transavia.com, commented: “We are absolutely delighted with no fewer than six new destinations added to our network. These are very attractive leisure destinations. Flying from regional airports has also been expanded. We want to show our customers that it’s just not worthwhile spending a few hours driving into Germany or Belgium. transavia.com will be offering these destinations at very competitive prices, but service and attention to our customers remain our key priorities.”