A huge buffet-style cake welcomed Vueling to its new base in Toulouse in the south of France. All but one of the eight new routes are international, a category of traffic that is growing at the airport, and a majority of flights are to destinations in Vueling's home country Spain.

A previous analysis in early 2010 by anna.aero of Toulouse Blagnac airport showed that the majority of the airport’s traffic growth in recent years had come from an increase in international services. This remained true in 2010 as domestic traffic fell slightly, while international traffic grew by over 6% to an all-time record of almost 2.5 million passengers. This year promises to be even better thanks in part to the launch of flights last Friday by Vueling, which is basing an A320 at the airport and has introduced flights to eight destinations, only one of which is domestic (Nice). 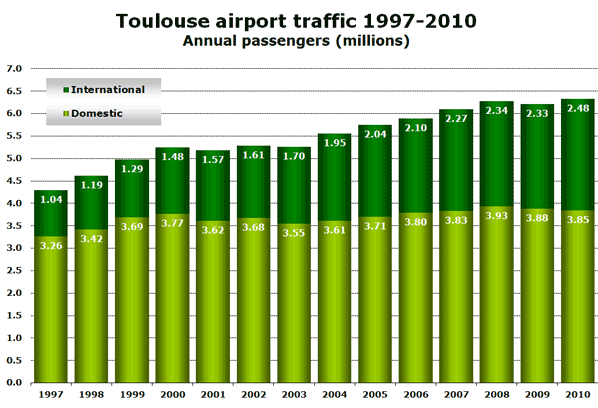 Once Vueling’s base is up and running, it will become the fourth busiest carrier at the airport in terms of weekly departing flights (26) and weekly departing seats (4,680) behind Air France, easyJet and Lufthansa.

According to anna.aero’s analysis of the airline’s flight schedules, the aircraft will depart Toulouse at 07:00 six days of the week (it appears to have a ‘lie-in’ on Wednesday mornings) and returns each evening no earlier than 23:00. On five of the seven days of the week, the 180-seat A320 will perform four rotations, resulting in fairly intensive aircraft utilisation. The airline has confirmed to anna.aero that during the peak summer period, the Wednesday Venice service will be replaced by an additional frequency to Malaga that departs at 10:10.

Five of eight routes to Spain; competition only on Nice and Malaga

Maybe unsurprisingly, Vueling’s network from Toulouse concentrates on Spain, with five of the eight routes crossing the border into the neighbouring country. Prague and Venice are the other international destinations offered, neither of which are currently served from Toulouse. The service to Tenerife is notable for using the island’s southern airport, whereas Vueling’s other routes to the island (all domestic Spanish flights) are to Tenerife Norte (TFN).

The only significant competition comes on the Nice route (which has a sector length of under 500 kilometres), which Vueling serves with four weekly flights operated late in the evening. This competes with Air France’s 18 weekly flights. However, according to Air France’s online timetable, the service is actually operated this summer by Air Corsica using 70-seat ATR 72-500 turboprops. As a result, Vueling’s services will increase weekly frequency by less than 25% from 18 to 22, but weekly seat capacity will be increased by almost 60%. Last year, the route generated just under 77,000 passengers, so this new low-cost capacity could see traffic on the route increase to around 120,000 annual passengers.

Foreign bases can be risky

Although easyJet and Ryanair operate the majority of their bases outside of their home country, other LCCs have sometimes struggled to make ‘foreign’ bases work. Examples of failed bases include Sterling in Helsinki, Norwegian in Warsaw and most recently Transavia.com in Copenhagen. Even easyJet has dropped a foreign base when it closed its Dortmund base in the summer of 2008 after four years of operations, although it still operates several routes from the airport using aircraft based at other airports.