The transatlantic market between Europe and the USA (and Canada) continues to generate many new services – according to anna.aero’s proprietary New Route Database almost 30 new transatlantic services have already been started or are expected to start in 2011, to be operated by 20 airlines. The following table summarises the new routes sorted by airline name.

In addition to these new services, a few other routes have been started over the winter season, including airberlin between Berlin Tegel and Miami, Transaero from Moscow Domodedovo to New York JFK and Miami, and Turkish Airlines from Istanbul to Washington.

However, a few routes have also been dropped, including LOT’s services to the US from Krakow and Rzeszow, American’s seasonal Chicago to Frankfurt service, Continental’s Newark service to Bristol, US Airways’ seasonal Philadelphia to Oslo service and Air India’s ‘scissor hub’ routes from Frankfurt to Chicago and Newark.

In addition to the new routes in the table above, Canadian charter operator Sunwing Airlines appears to be starting seasonal transatlantic services from mid-June from Toronto to Amsterdam, Lisbon, London, Paris, Porto and Rome.

Planned capacity currently up 4% in August

Comparing OAG schedule data for the first week in August 2011 with that of 2010 reveals that transatlantic capacity (between Europe and US/Canada) is up 4.1% to an estimated 920,000 weekly one-way seats. Aircraft movements will also be up almost 5% suggesting the use of slightly smaller aircraft on average. 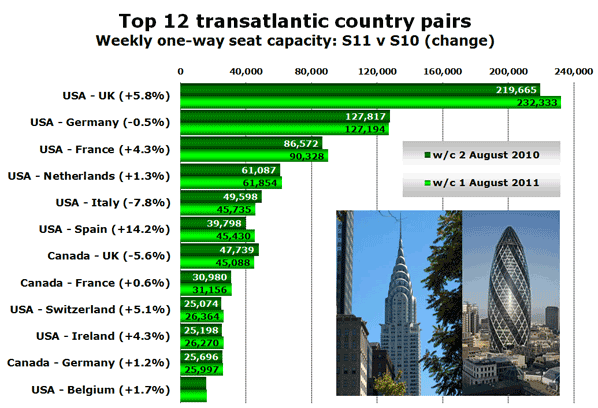 For the second year running, the USA to Spain market has seen double-digit capacity growth despite Spain’s historically deep recession, in part thanks to Iberia’s two new routes started this summer from Barcelona to Miami, and Madrid to Los Angeles.

Delta still #1 but complaining about overcapacity

The combined transatlantic capacity for the ‘new’ United (including Continental) fall just short of the figure for Delta, leaving Delta as the #1 transatlantic carrier at present. However, it has been reported that the airline blames a significant part of its poor Q1 financial performance on an oversupplied transatlantic market, where it grew capacity by 16% in the first quarter compared with a year ago. Based on current schedule data, Delta’s peak August capacity is up a more modest 3.2%. 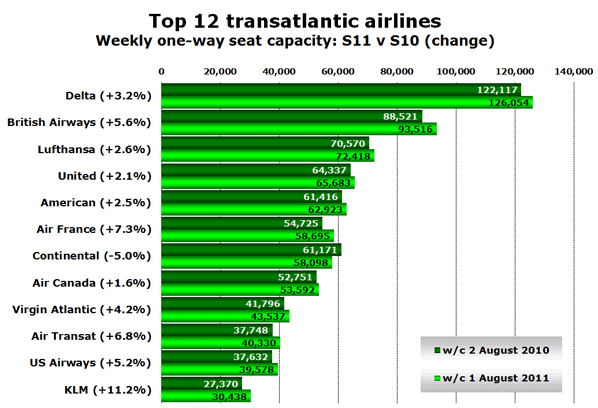 The fastest-growing airline among the top 12 in the transatlantic market appears to be KLM where capacity this summer is up 11%. Some of this can be attributed to the introduction of a new Miami service that began in March, but there are also frequency (and hence capacity) increases to Toronto, and capacity increases to Atlanta.

The introduction of an ‘eco-tax’ in Germany this year has added €40 per person to a flight to the USA, and last November saw an increase of 33% in Air Passenger Duty (APD) in the UK from £45 to £60 ($100) for flights to the US. This appears to have curtailed growth in the US-Germany market (notwithstanding airberlin’s best efforts), but seems to have had little impact on the UK market, at least in capacity terms. According to UK CAA data for the first three months of 2011, passenger numbers between the UK and USA are up just 0.5%, having risen 2.5% in January, fallen 1.4% in February and been up just 0.2% in March.