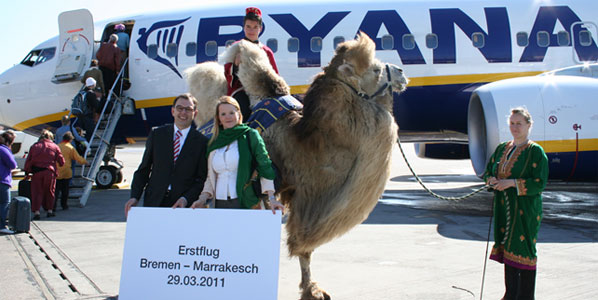 March 29: The Bremen-Marrakesh launch featuring Bremen Airport’s CEO Juergen Bula, Henrike Schmidt, Ryanair’s Sales & Marketing Manager Germany, and “Ernie” the camel. Since publishing this photo last month, anna.aero has been inundated with mail from overworked network planning executives correctly pointing out that this camel is obviously a Russian and not a North African specimen. We apologise for this lapse in our usual high standards of accuracy and will in future check any “facts” Ryanair has given to us with a zoologist before publication.

Ryanair (with around 50 routes) and easyJet (19 routes) are now second and third in the Moroccan market with a combined capacity share of almost 20%.

In just six years, passenger numbers at Morocco’s airports have double from 7.7 million in 2004 to 15.5 million in 2010. The main reason for this was the country’s decision to sign an ‘open-skies’ agreement with the EU in December 2005, opening the way for Europe’s route hungry low-cost carriers to explore a new tourist friendly region. Last year saw demand grow by 15%, with the country’s top seven airports all reporting double-digit growth. 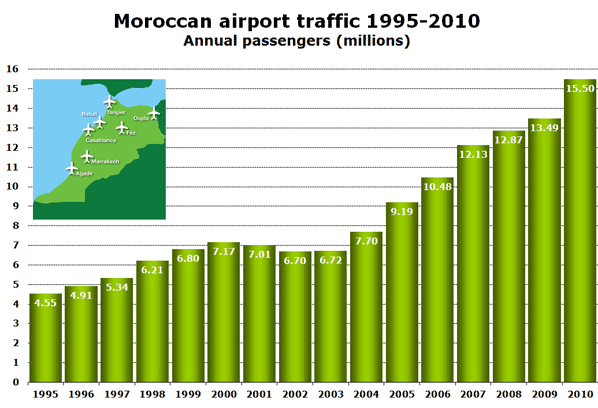 Over 70% of traffic is on routes to Europe, with France the dominant market accounting for over 30% of all passengers. Domestic routes only account for around 10% of passenger traffic passing through Moroccan airports. In the first quarter of 2011, passenger numbers were up 9.4%. Non-French European traffic was up 26.6% in January, 18.6% in February and 9.1% in March, well above the overall average.

Casablanca’s Mohammed V airport processed 47% of all Moroccan airport passengers in 2010 and handled over 7.2 million passengers (+13.3%). Marrakech airport accounts for a further 22% of the country’s air passengers and recorded growth of 15.0% last year. 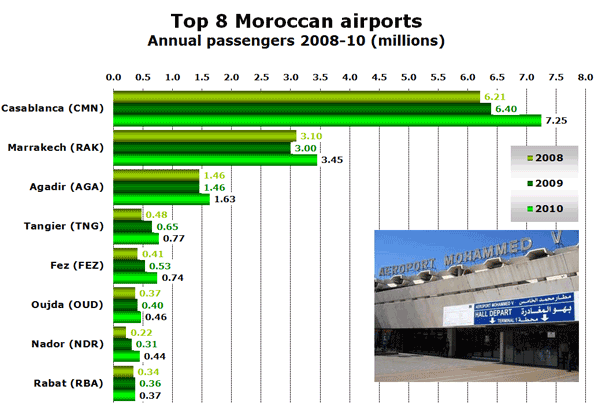 Agadir is the only other airport with over one million annual passengers, handling 1.63 million passengers in 2010 (+11.8%). The airport serving the country’s capital in Rabat saw just 367,000 pass through it and dropped from seventh to eighth in the ranking of busiest airports in Morocco.

Moroccan-based carriers still have over 60% of scheduled market

An analysis of the leading airlines flying scheduled services to Morocco shows that Royal Air Maroc (RAM), the national flag carrier, is still the dominant airline with over 55% of scheduled flights and over 50% of scheduled seat capacity this August. To respond to the growth in foreign LCCs, RAM set up Atlas Blue in 2004, its own in-house low-cost carrier. However, at the end of 2009, its operations were merged back into RAM and the name was dropped. 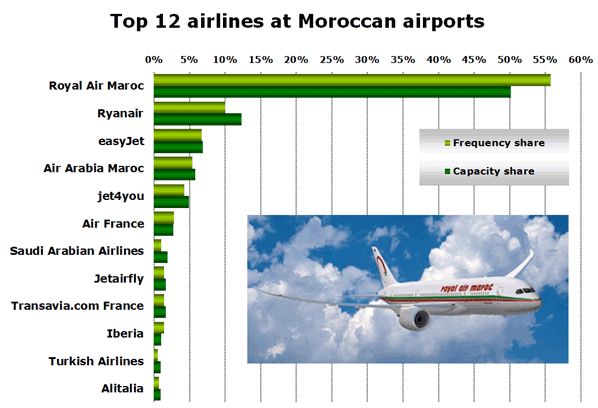 In May 2009, Air Arabia set up a Casablanca-based subsidiary called Air Arabia Maroc, which now flies from five Moroccan airports to destinations across Europe using a fleet of five A320s. jet4you is another local carrier which is currently owned by TUI, but last July it was revealed that TUI Travel plc had signed a letter of intent with Royal Air Maroc for RAM to take a majority stake in jet4you.

Ryanair (with around 50 routes) and easyJet (with 19 routes) are now ranked second and third in the Moroccan market with a combined capacity share of almost 20%. Ryanair serves six Moroccan airports (but not Casablanca), while easyJet serves five (including Casablanca). Other LCCs with a presence in Morocco are Norwegian, Transavia.com and Vueling.

Ranked just outside the top 12 airlines are Emirates, Qatar Airways and Etihad, all of which have daily (or almost daily) services to their home hubs.

New routes this summer from airberlin, bmi and Brussels Airlines

In such a vibrant market, it is no surprise to find several airlines starting new routes to Morocco this summer. These are summarised in the table below.

The UK market is particularly dynamic at present with bmi starting two new routes, British Airways re-entering the market and Ryanair starting a London Stansted to Marrakech service. According to UK CAA data, the UK market grew by an impressive 38.3% last year from 544,122 passengers to 752,372, thus representing around 5% of the total Moroccan market.

April’s bomb attack in Marrakech’s famous Djemaa el-Fna square may have some impact on demand in the coming months, but assuming it remains an isolated incident, it is unlikely to have lasting consequences for this country’s tourism industry and the airlines’ deepening interest.