Qatar’s just-announced new routes: an analysis of the competition 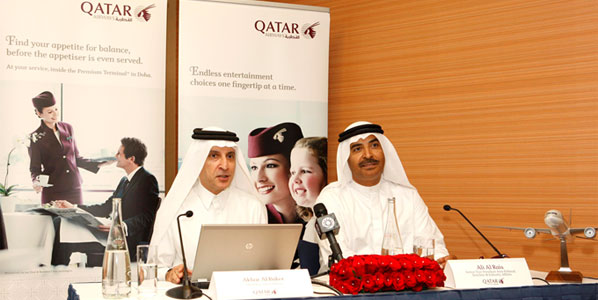 May 2, Arabian Travel Market in Dubai: Qatar Airways CEO Akbar Al Baker (left) announces the expansion – the only other major airline serving all of these destinations already is Turkish Airlines.

Having recently celebrated the milestone of flying to its 100th destination (Aleppo in Syria), Qatar Airways is off and running in the search for its next 100 destinations. Before this week, it had already announced plans to start serving Shiraz (5 June), Venice (15 June), Montreal (29 June), Kolkata (27 July), Sofia (14 September) and Oslo (5 October). Now, the ambitious Doha-based carrier has revealed another four destinations that it will start serving before the end of 2011.

Who else flies to Baku, Entebbe, Medina and Tbilisi?

Medina in Saudi Arabia will be served four-times weekly from 14 July (making it the carrier’s fourth destination in Saudi Arabia), while Entebbe in Uganda gets daily flights from 2 November. On 30 November, the airline starts daily non-stop flights to Baku in Azerbaijan, with the aircraft then flying on to Tbilisi in Georgia. All of these routes will be flown with the airline’s fleet of A320s.

All of these new destinations are served by a relatively small number of major international airlines. A summary of existing international services provided by major airlines is provided in the following table.

The only major airline serving all four of these destinations already is Turkish Airlines (to Istanbul), further evidence of that airline’s marketing slogan ‘Globally yours’. While Qatar Airways will have started serving (at the current count) 15 new destinations in 2011, by contrast, its fellow MEB3 member Etihad Airways has so far started just one new route this year (Bangalore/Bengaluru in January) with Malé (starting in November) the only other new destination planned for this year.