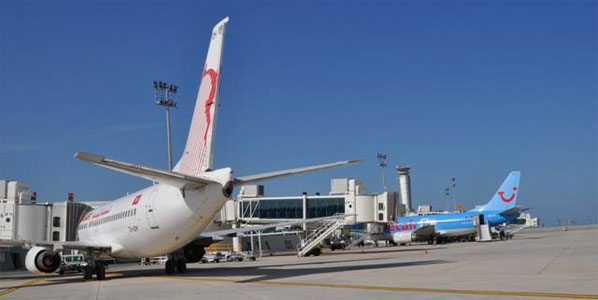 Tunisair operates scheduled/charter flights sometimes on behalf of European tour operators such as TUI (Germany), who are also represented at Enfidha by Jetairfly (Belgium) and Thomson (UK).

Enfidha-Hammamet airport on Tunisia’s east coast opened in December 2009. It was built and is operated by Turkish airport company TAV in a deal that also requires the company to operate Monastir airport from which most of Enfidha’s traffic has been taken. The new airport is around 100 kilometres south of the capital Tunis, but more significantly claims to be closer to 80% of Tunisian holiday resorts than any other Tunisian airport, including Monastir which is located 65 kilometres further south.

Since the airport serves many holiday resorts, the majority of airlines operating at the airport are what used to be classified as charter airlines, as passengers will have booked their resort accommodation and flights at the same time through the same company. According to OAG schedule data, the following airlines are operating to Enfidha in the first week of August. In addition to these services which are listed in OAG and can thus to some extent be considered scheduled services, there are also a range of pure charter services often operated by scheduled airlines on behalf of a variety of tour operators. A closer look at TUIfly’s on-line timetable for German services to Enfidha reveals that it offers flights from 11 German airports but that these are operated by a mix of TUIfly’s own aircraft as well as those from airberlin, Germania, and Tunisair.

airberlin also serves Enfidha from several German airports, but only from Munich and Nuremberg are flights operated non-stop. All other destinations are served via one of these two airports. Local charter carrier Nouvelair also operates flights to and from Enfidha from a number of airports across Europe on behalf of a variety of tour operators. Airports served include Hamburg, Kiev, Lille, Moscow and Stuttgart.

OAG data for August also shows that ‘scheduled’ services to Monastir are dominated by French destinations (Lyon, Marseille, Nantes, Nice and Paris Orly) flown by a combination of Tunisair and Transavia.com France.