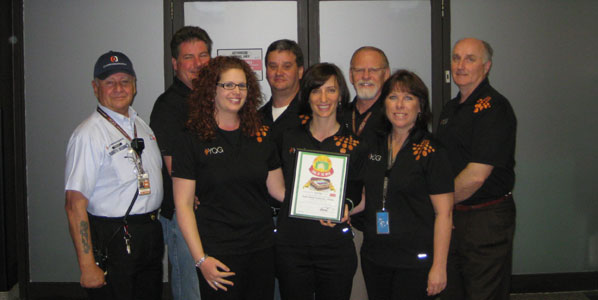 Early indications are that Canada’s busiest airports are having a solid if unspectacular start to 2011, having achieved growth of around 4% in 2010. Montreal (+6.1%) just edged out Ottawa (+5.7%) and Toronto (+5.2%) to be the fastest-growing major Canadian airport in 2010. Montreal saw transborder (US) traffic grow by 10% last year, while domestic demand rose just 3.6%. In the first two months of 2011, Montreal has again outperformed Ottawa and Toronto in terms of growth, although Halifax reported 12% growth in February thanks to hosting the Canada Winter Games. This resulted in local schools closing for an extra week, enticing locals to take a family holiday, thus boosting airport traffic. 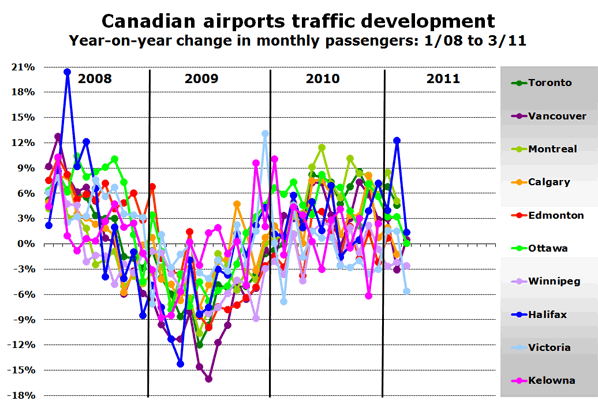 The only airport to report a fall in traffic in every month in which it has reported in 2011 is Winnipeg, where passenger numbers were down between 2% and 3% in January, February and March. In 2010, its passenger numbers had remained virtually unchanged at just under 3.4 million.

Latest figures from Canada’s two major carriers, Air Canada and WestJet, show that both airlines are growing their demand (RPMs – revenue passenger miles) faster than their passenger numbers. In the first quarter of 2011, WestJet’s “guests” (its term for passengers) grew by 5.7%, while RPMs grew by 11.7%. As a result, the average sector length increased by 6.0% from 963 miles to 1,021. At the end of the first quarter, the airline’s fleet comprised 94 737s, up from 88 one year ago. 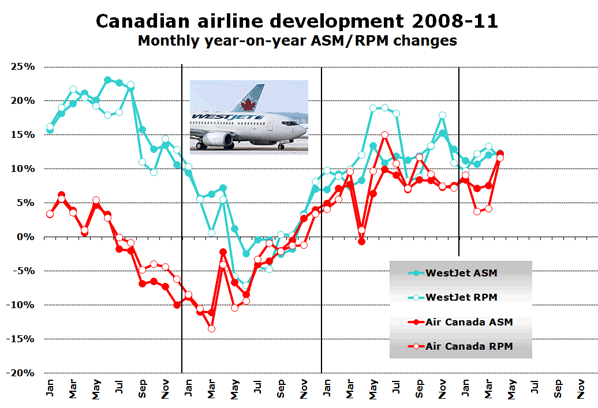 Similarly, Air Canada reported only very modest growth in passenger numbers as much of the 5.7% growth in RPMs can be accounted for by a 4.0% increase in average sector length from 856 miles to 890. At the end of the first quarter, Air Canada’s operating fleet comprised 328 aircraft, up just one from a year ago.

A major development for Air Canada was its recent resumption of services at Toronto’s downtown City airport, previously home only to Porter Airlines. From 1 May, Air Canada has launched 15 daily flights from Toronto City to Montreal. The services, operated under the new Air Canada Express brand, which is being introduced for all regional services operating under capacity purchase agreements, are operated by Sky Regional Airlines’ Q400s, the same aircraft type as used by Porter Airlines at the airport.

Not to be outdone, Porter recently started up to three daily flights to Windsor (Ontario) and this week began twice daily flights to Sault Ste. Marie, also in Ontario, a route that Air Canada serves from Toronto Pearson with over 40 weekly flights. Last year, Porter’s ASMs grew by 66%, while RPMs grew by 88%. Average load factor rose over six percentage points to 54.2%. The airline’s fleet now comprises 20 Q400s.