Germany and Morocco outperform rivals from the UK in 2010; passenger demand down in 2011 to Egypt and Tunisia UK international is not the only market that sees change. easyJet this week moved its operations between London Luton and Belfast from Belfast City to Belfast International, consolidating all its Northern Ireland operations at one airport after a single-route trial at the airport named after George Best.

While UK airports as a whole saw passenger numbers fall by over 3% in 2010, some individual country markets registered growth. Tracking the year-on-year performance of our basket of eight ‘mature’ country markets all the way up to March 2011 shows that of the eight, the best performing for the last two years has been Germany. Primarily a business rather than a leisure market, this reflects the strength of the German economy. In the first three months of 2011, the only other mature markets to report growth every month were Italy and the Netherlands. The only mature market to report traffic declines in January, February and March was mainland Spain, though passenger numbers to the Canary Islands were up over 10% in both January and February, and up almost 6% in March. Even Ireland was up 1.4% in January. 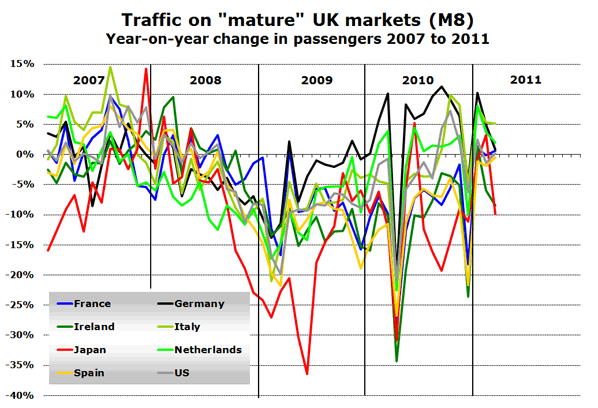 The big volcano-induced dip in traffic last April is no surprise but the big dip in December is rather more embarrassing to the UK as this was down to many airports’ inability to cope with the higher than usual snowfall experienced across many parts of Europe at the end of last year. The UK’s busiest airport London Heathrow struggled more than most and as a result passenger numbers across all markets suffered.

Morocco and China perform well in 2010

The majority of the ten ‘emerging’ country markets being tracked performed well in 2010, but two Central European countries (Bulgaria and Poland) reported an overall fall in traffic of 2.7% and 0.7% respectively, although the Polish market would probably have grown had it not been for volcano ash and snow. Morocco reported the highest growth with demand in summer up between 60% and 70%. The non-stop market to China has been growing by more than 10% for most of 2010, 30% in January 2011, 16% in February, and 9% in March. 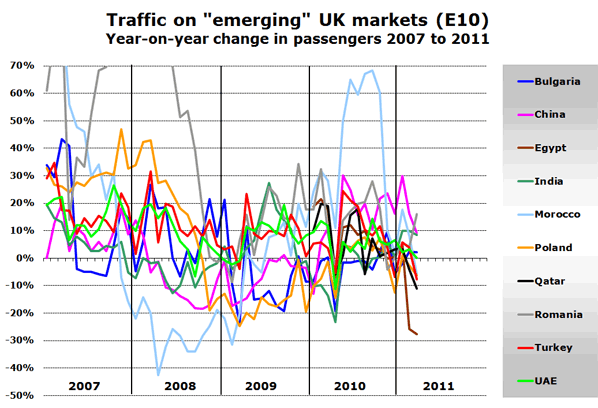