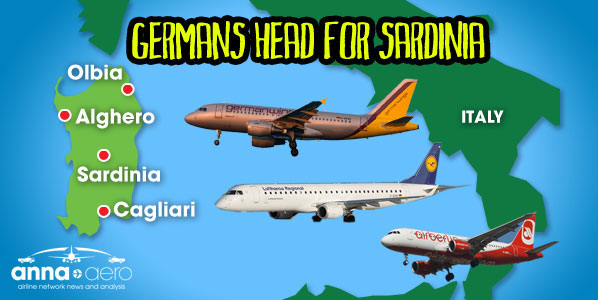 Following airberlin's launches from Berlin Tegel and Münster/Osnabruck the German carrier will serve Olbia from nine German airports. However, so far this year, Cagliari has seen the greatest number of new routes launched - nine - five by Ryanair and the others by airberlin, germanwings and Lufthansa Italia.

When anna.aero last looked at the Sardinian market, Ryanair had recently decided to make Alghero and Cagliari designated bases, though the airline had been operating at the airports for some time. Despite the launch of several new routes since then Ryanair still ranks second behind Meridiana fly when scheduled seat capacity across three Sardinian airports (the other is Olbia) is taken into account.

While Italian airport traffic as a whole fell by around 2% in both 2008 and 2009, passenger numbers at airports in Sardinia rose by 7% in both years. However, in 2010 when Italian airport traffic as a whole grew by 7%, Sardinia’s airports saw the number of traveller fall by just under 1%. This is only the second time in the last 15 years that passenger numbers have fallen, the first being in 2001. 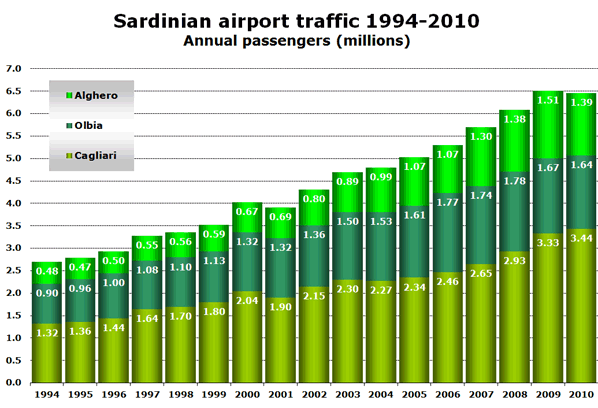 All three airports have reported year-on-year growth in the first quarter of 2011. Passenger numbers are up 8.2% in Alghero, 6.1% in Olbia and 0.4% in Cagliari.

Analysis of scheduled traffic during this summer’s peak month of August reveals that overall Meridiana fly is the number one airline across all three airports, beating Ryanair into second place. Ryanair offers flights to 20 destinations from Alghero (including seven in mainland Italy), while from Cagliari the carrier serves 25 destinations (including 12 in mainland Italy). It does not offer any flights to or from Olbia. 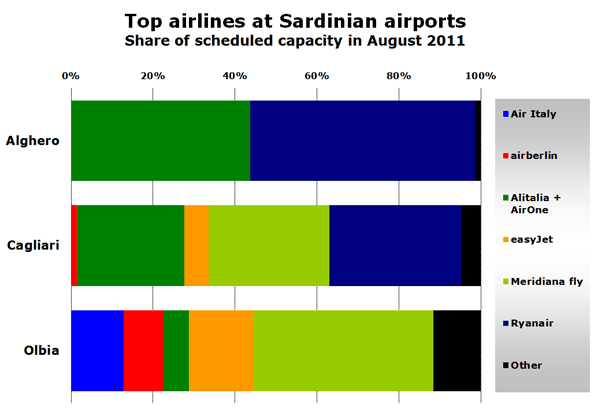 Meridiana fly’s focus is on domestic routes resulting in Ryanair being the leading airline for international flights. Alitalia (including its subsidiary AirOne) are represented at all three airports but it offers only domestic flights primarily to Milan and Rome. Its experiment of serving Barcelona, Brussels and Paris from Alghero during the peak summer season in 2010 does not appear to be being repeated this summer. Domestic flights account for around three quarters of all airport traffic in Sardinia, but the range of international services continues to grow.

Last week saw the launch of two new routes to Olbia by airberlin, from Berlin Tegel and Münster/Osnabruck. This summer the German carrier will serve Olbia from 10 airports, nine in Germany and one in Switzerland (Zurich), while its partner niki operates flights from Vienna. Olbia is also easyJet’s leading airport in Sardinia with eight routes, compared with five at Cagliari. Other LCCs operating international flights to Sardinia include bmibaby, germanwings, Jet2.com, Norwegian, SmartWings and Transavia.com. Legacy carrier flights to Sardinia are offered by Austrian, British Airways, Iberia, Lufthansa and Luxair. 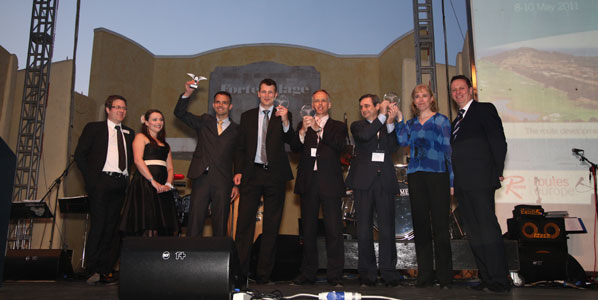 The 6th Routes Europe took place in Cagliari this week atttracting more than 700 delegates from 300 airports and 70 airlines. During the event, Budapest Airport (representing Central & Eastern Europe) was announced as winner of the third heat of this year’s Routes Airport Marketing Awards and is now automatically shortlisted for the world awards in Berlin in October. The other catergory winners were Copehangen (Scandinavia and the Baltics), Amsterdam Airport Schiphol (Western Europe) and Barcelona (Mediterranean and Southern Europe).