In January 2010, Bari in southern Italy became a Ryanair base, which generated 15 new routes at the airport during last year. This greatly contributed to the airport’s 20% growth, which earned it a EURO ANNIE award this week.


Bari, located in the heel of Italy in the Puglia region on the Adriatic coast, is this week celebrating its EURO ANNIE award as the fastest-growing airport in Europe in 2010 in the 2-3 million passenger category. In January 2010, Ryanair upgraded the airport to a full base, having started flying there from London Stansted in 2004. A total of 15 new routes were launched during 2010. As a result, passenger numbers surged 20% to 3.4 million, meaning that the airport’s passenger numbers had more than doubled in just five years. 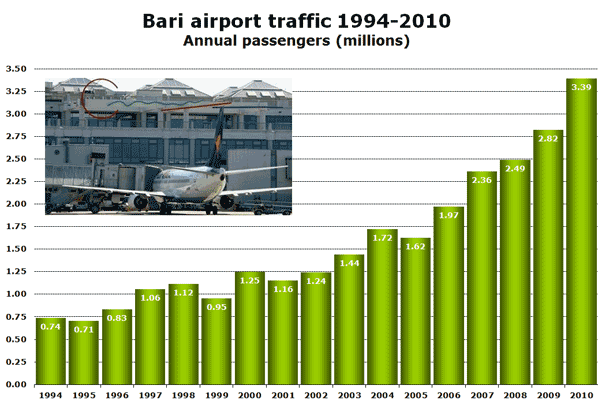 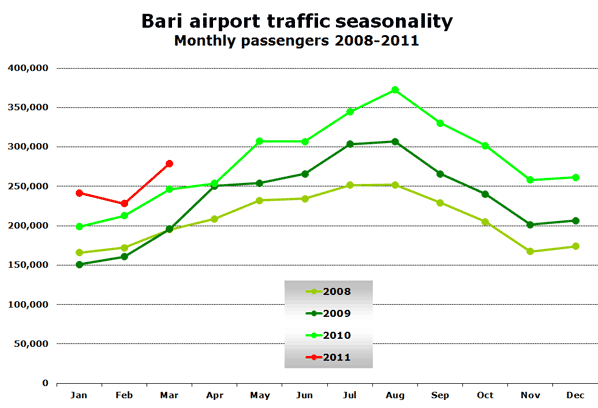 Since the start of the winter season, the following routes have been started (or have been announced). Apart from Ryanair, several other carriers have also new routes to Bari to their networks including airBaltic, airberlin, germanwings, Spanair and Wizz Air.

Italian carriers at the airport operate only on domestic routes. Alitalia serves Bologna, Milan (Linate and Malpensa), Rome, Turin and Venice, while Blu-Express has three weekly flights to Catania. Domestic traffic in fact accounts for almost three-quarters of the airport’s traffic in 2010 and grew by 15% to 2.5 million, while international traffic was up 43% to over 870,000 passengers. Competition on domestic routes is provided by easyJet and Lufthansa Italia (both to Milan Malpensa) and Ryanair (to Bologna, Cagliari, Genoa, Milan Bergamo, Pisa, Rome Ciampino, Trapani, Turin and Venice).