Airline with the most new routes
Ryanair 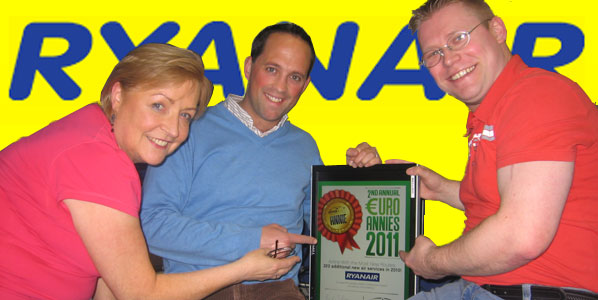 No surprises here as Ryanair and easyJet again take the top two spots. For the second year running, Ryanair started over 300 new routes, but whereas the airline last year dropped around 100 routes for a net gain of 200 routes, this year’s analysis shows the airline dropping over 160 routes, while starting around 320, for a net gain of about 160. Between August 2010 and August 2011, Ryanair has started five new bases in Barcelona, Gran Canaria, Lanzarote, Seville, Tenerife Sur, and re-opened its Valencia base. All of these bases are in Spain, highlighting the importance of the country to Ryanair’s current network strategy.

easyJet starts over 60 routes, but drops 25

A long, long way behind in the runners-up position once again is easyJet with a net gain of 37 routes, comprising 62 new routes and 25 dropped routes. The highest frequency routes it dropped were domestic routes between London Stansted and Newcastle, and between London Luton and Belfast City airport. The latter route returned to Belfast International on 9 May. easyJet has started no new bases during the last year with Lisbon planned to become the next base later this year.

Despite this huge difference between the two airlines in terms of the number of routes started, it is interesting to note that in the first quarter of 2011, easyJet’s year-on-year passenger numbers have grown over twice as fast as Ryanair’s.

Flag-carrier with the most new routes
Alitalia

Among Europe’s legacy / flag-carriers, the competition was much closer. Last year, it was airBaltic that edged out Turkish Airlines, but this year a resurgent Alitalia leads the way with a net gain of 21, thanks to starting 26 new routes and dropping just five (four international routes from Alghero and its Rome – Tripoli service). The airline’s new routes include long-haul services from Rome Fiumicino to Beijing (starting 1 June) and Rio de Janeiro (starting 4 June). 15 of the airline’s new routes are domestic, while 11 routes in the new offering are international services. Apart from the already mentioned long-haul flights, the airline also started twice-daily flights between Florence and Amsterdam, as well as daily flights between Rome and Toulouse.

AeroSvit, a member of the AEA, saw passenger numbers surge by 35% to 1.71 million in 2010, while in the first quarter of 2011, demand for its flights is up a phenomenal 175%. (Source: AEA) It also launched 26 new routes between August 2010 and August 2011, but abandoned seven for a net gain of 19. New destinations added during this period from its main base at Kiev’s Borispol Airport include Copenhagen, Karlovy Vary, Krakow, London Gatwick, Minsk, Stuttgart, Tashkent and Yerevan. 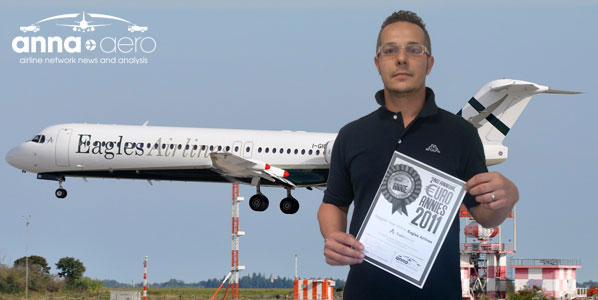 Eagles Airlines’ Network Manager Manuel Pavan posed with the airline’s EURO ANNIE prize awarded for being the biggest new airline in the European market. In August, the airline will operate 12 routes, 10 of which are currently on sale.

This is a slightly trickier category to determine, as some airlines appear as ‘new’ because they haven’t previously reported their schedule data to OAG or they have started scheduled services after previously operating charter flights. Our objective is to find the airline with the biggest presence this August that was not operating in Europe last August.

So congratulations to Eagles Airlines of Italy, the successor to Alpi Eagles, which operates three Fokker 100s and started flying last September. The airline’s network is still evolving, but according to the airline’s on-line timetable and booking tool, the following 10 routes will be operated this August:

We have also been informed by the airline that two further routes will launch on 3 July; Venice-Skopje and Rome Fiumicino-Skopje.

The only route to be served at least daily is between Venice and Catania, which will be served twice daily. Competition on this route is provided by Alitalia and WindJet who also both operate the route twice daily. In total, Eagles Airlines currently operates from 13 airports across Europe, 10 in Italy, two in France (Nimes and Paris) and one in Romania (Bucharest).

Belle Air Europe is another new Italian airline (based in Ancona), which has Albania’s Belle Air as one of its partners. According to the airline’s website, the network last winter comprised eight routes between Italian airports (Ancona, Milan Bergamo, Verona and Venice) and Skopje (Macedonia), Pristina (Kosovo) and Tirana (Albania). The airline’s website is advertising the fact that it has also started twice-daily flights between Ancona and Milan Bergamo. The airline started with a single ATR72-500, but for this summer, it has also acquired an A319 to launch flights between Pristina and a number of destinations in Germany, including Düsseldorf, Munich and Stuttgart. As a result, the airline takes the runner-up spot.