Airport with the most new carriers
Venice Marco Polo 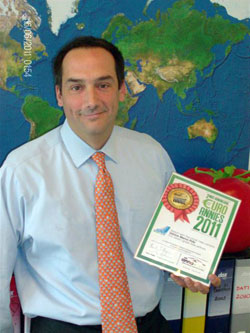 A happy Camillo Bozzolo, Aviation Development Director SAVE – Venice Marco Polo Airport, celebrates a EURO ANNIE, and the arrival of seven new airlines in the past year.

Congratulations to Venice Marco Polo airport for winning arguably the most prestigious EURO ANNIE award for the airport that has seen the biggest net gain in airlines during the 12 month period analysed (August 2010 to August 2011). Before anyone points out that the airport will benefit unfairly from the temporary closure for part of this summer of Venice Treviso (for runway upgrade works), we have in fact taken this into account and not included those carriers that would normally not have been operating at the airport (germanwings, Ryanair, Transavia.com, Wizz Air and Wizz Air Ukraine). Even excluding these carriers, Venice still registers a net gain of five airlines, despite having lost Tarom (to Bucharest), and XL Airways France’s services to Paris falling below our threshold level.

A total of seven new airlines have been identified for Venice Marco Polo Airport with the new daily flight to Doha with Qatar Airways undoubtedly the airport’s highest profile new carrier during the period being analysed. The biggest new carrier is Eagles Airlines, the airline that rose from the ashes of Alpi Eagles and has won a EURO ANNIE of its own this week.

In addition, as Sun D’Or had its licence suspended, Venice Airport has confirmed that El Al will be operating a weekly service to Tel Aviv this summer. This is a further new carrier for the airport. Last year, Venice Marco Polo saw passenger numbers grow by 2.3% to 6.85 million, with domestic traffic up 10.9% to 1.9 million and international traffic down 0.7% to 4.94 million (Source: Assaeroporti).

Airport with the most new routes
Moscow Domodedovo 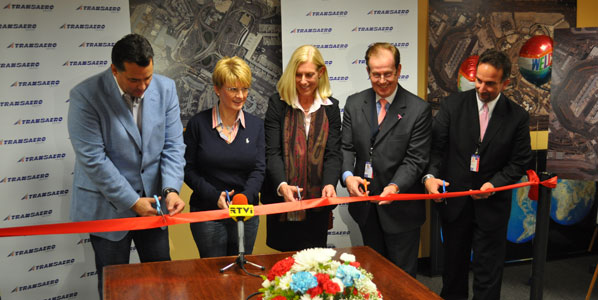 In October last year, Moscow Domodedovo-based Transaero linked the airport with New York JFK. This contributes to the airport’s net gain of 22 new routes in one year.

For the second year running, the airport that wins this prestigious award is one that does not have Ryanair as a customer (last year, it was Rome Fiumicino). Given the huge number of new routes that Ryanair has started, it might reasonably be expected that one of its bases would win the EURO ANNIE award for airport with the biggest net gain in routes. However, this award goes to Moscow Domodedovo, which has seen a net gain of 22 new destinations, thanks to the continued expansion of Transaero, the shift of flights from Moscow Vnukovo to Domodedovo by RusLine, and a number of new routes from Western European carriers.

In 2010, Moscow Domodedovo’s passenger numbers grew by 19.2% to 22.3 million, confirming its role as Russia’s busiest airport.

Since the opening of the new terminal 1 in June 2009, Barcelona has made the old terminal available to LCCs and they have responded enthusiastically to the opportunity presented to them. Although the airport lost seven destinations during the last year, it gained 28, making a net gain of 21, just one behind Moscow Domodedovo. Ryanair is responsible for seven new routes, and Wizz Air three, while Iberia and Vueling combined have been responsible for the addition of eight new destinations compared with last August, including Genoa, Miami and Mykonos. Other notable new non-stop routes are Singapore Airlines from Singapore (previously only served via Milan Malpensa) which then carries on to Sao Paulo, Transavia.com to Eindhoven, Belle Air to Tirana, Blue Air to Bacau, Ural Airlines to Samara, Czech Airlines to Bratislava and Spanair to both Bamako (Mali) and Bari. 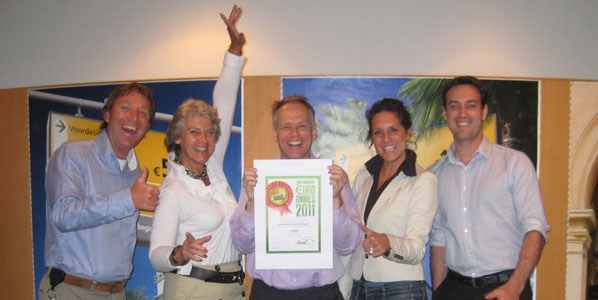 Focusing on new ‘long-haul’ routes (defined as routes outside of Europe) reveals that Amsterdam Schiphol and Istanbul Atatürk are joint winners when it comes to analysing which airport has added most new non-European destinations to its portfolio.

Amsterdam lost two non-stop long-haul routes, while Entebbe, which was previously served non-stop in both directions, is now part of a ‘triangle’ operated by KLM (Amsterdam – Kigali – Entebbe – Amsterdam). However, a total of nine new long-haul destinations have been added for this summer with Arkefly (the Dutch division of TUI) adding four new destinations, and KLM three. In addition, Transavia.com has started operating two routes to Egypt (Luxor and Marsa Alam) on a year-round basis when previously they only operated during the winter season. The nine completely new long-haul destinations are summarised in the table below.

With the exception of China Southern’s Guangzhou service, all of the other new destinations have been started by Dutch carriers. 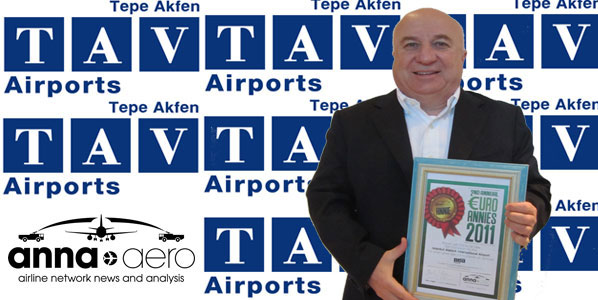 Given its location, it is difficult to consider flights from Istanbul to Iraq and Iran as true long-haul flights, but they are certainly flights outside of Europe. Since last August, Istanbul’s main airport has apparently lost non-stop flights with PIA to Islamabad, but has gained eight new destinations, for a net gain of seven. The eight new destinations are summarised below:

Coincidentally, one destination appears in both tables, Guangzhou in China, while both airports have new routes to destinations in Iraq and the USA.

Airport with the most airlines
Paris CDG 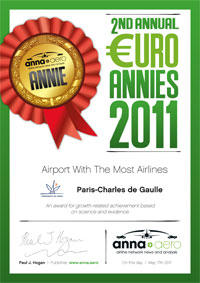 Winning this award for the second year running is Paris CDG, which says a lot about the appeal of Paris as a destination and the ability of airlines to find slots to operate at the airport. With 107 airlines set to operate scheduled services to Paris CDG this August, the French airport once again beats Frankfurt (with 103 airlines) into second place. With Frankfurt getting a new runway later this year, it will be interesting to see if this will trigger a surge in new airline interest to take Frankfurt ahead of Paris next year.

Heathrow ranks just fourth and not likely to climb any higher

Rome Fiumicino (99 airlines) again easily beats London Heathrow (84 airlines) into third place, with Europe’s busiest airport under severe pressure from Amsterdam (83), Milan Malpensa (81) and Barcelona (79). Rounding out the top 10 of this ranking are Munich, Madrid and Athens. The decision by the current UK government not to pursue the previous government’s plans to build a third runway means that London Heathrow is unlikely to make the top three any time soon and risks sliding down the top 10 in the years ahead.

We split Europe’s airports into six size categories, collected data for over 300 of them in 2010 and came up with the winners (and runners-up) in each category. 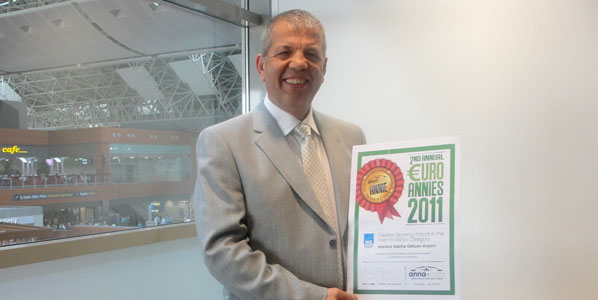 Gökhan Bugday, CEO of Istanbul Sabiha Gökçen International Airport: “This statistical-based award has proven once again that Sabiha Gökçen’s success is not a coincidence but the outcome of the great effort of all airport staff, strong relations with airlines, unique marketing strategies and well-cared customer relations.”

Three of the six Euro Annies awarded for passenger growth in 2010 have been won by airports that also won awards in this category last year. Sicily’s Trapani is again the fastest growing airport in the one to two million passenger division thanks to more new routes from Ryanair. After their success in the 5-10 million passenger division last year, Istanbul Sabiha Gökçen airport has this year won the award in the greater than 10 million airport division. Last year, its passenger numbers grew by almost 71% to just over 11.1 million, easily beating into the runners-up position Moscow Sheremetyevo, which saw demand rise by 29.5% to 19.1 million. Pegasus Airlines is the leading airline at the Turkish airport and continues add new routes and frequencies. 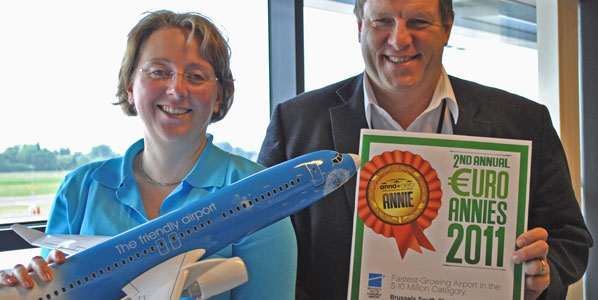 Holding the prize: Brussels South Charleroi Airport’s CEO Jean-Jacques Cloquet. Holding the plane: Ingrid Tahon, Aviation Executive. “We are delighted with our EURO ANNIE Prize and would like to thank our client airlines for helping us make it happen!” said an ebullient Cloquet.

Brussels Charleroi also won again, despite moving up a division. Last year, the Belgian airport won the 3-5 million passenger division, but this year, it wins in the 5-10 million division thanks to recording growth of 32% to 5.2 million passengers in 2010. Ryanair was again the major driver of traffic growth.

Bari goes from runner-up to winner

Last year, Bari airport was runner-up in the 2-3 million passenger division, but this year, it scoops the top prize in the 3-5 million division thanks to an increase in passenger numbers of 20% to 3.4 million. Ryanair made the airport a base in early 2010 and added over a dozen routes during the course of the year.

Eindhoven and Kaunas are first-time winners

Eindhoven is the winner in the 2-3 million passenger division, registering growth of 25.2% to 2.14 million, just beating Yekaterinburg Airport in Russia, which saw demand flourish by 24% to 2.7 million passengers. Eindhoven’s new routes in 2010 included Ryanair services to Brindisi, Faro, Malaga, Malta, Oslo Rygge, Seville and Trapani, Transavia.com to Salzburg, and Wizz Air to Warsaw and Wroclaw.

Kaunas in Lithuania scooped the under one million passengers prize with growth of 77% to 810,000 passengers. Not surprisingly Ryanair was again instrumental in this airport’s growth with the airport becoming a designated base in May of last year. This resulted in a raft of new routes being launched to the likes of Berlin, Brussels, Edinburgh, London, Milan, Oslo and Paris. Runner-up in this category was Rimini airport, which reported a 45% rise in passenger numbers to just under 550,000. Its new routes in 2010 included Armavia to Yerevan, Darwin Airlines to Rome, Ryanair to Liverpool, and S7 to Moscow Domodedovo.