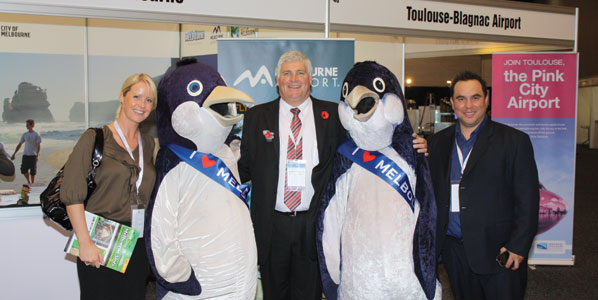 anna.aero's former International Sales Manager Nicky Eakins has joined Melbourne Airport as Airline Marketing Manager. Nicky is pictured here at last November's IATA Slots Conference with Rob O'Brien, Tourism Victoria's Director of Aviation (in between the penguins), and Carl Jones, Airline Business Manager, Melbourne Airport (now Nicky's new boss). "At anna.aero, we are always mortified to lose our expert staff, but on a personal level, I am delighted that Nicky has joined our great friends in MEL, where her substantial contacts in air transport can be put to great use," says anna.aero publisher Paul Hogan. "My only puzzlement was that on checking her HR file I saw that Nicky listed 'horse riding' as one of her interests on her original application – yet nobody can recall her ever being seen near one."

Despite some severe weather conditions on Australia’s east coast during the early part of this year domestic air travel demand still grew by 3.3% to just over 13 million passengers. Passenger numbers were up 7.1% in January, unchanged in February, and up 2.7% in March. Significant new domestic routes include Jetstar launching daily flights between Gold Coast and Hobart just before Christmas, and Tiger Airways entering the Brisbane to Sydney market with three daily flights in early February, and Strategic Airlines introducing double-daily flights between Brisbane and Gladstone. 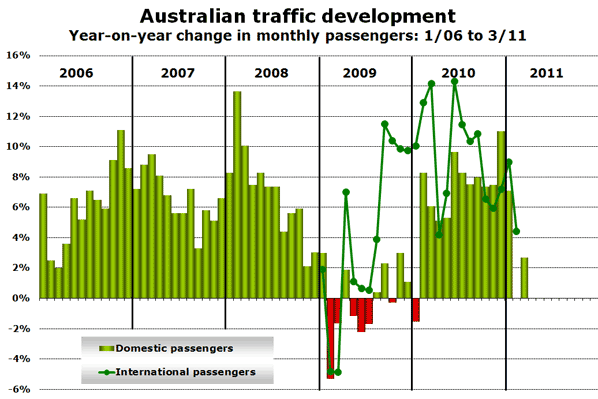 International traffic which increased by 9.5% in 2010, has also started 2011 well, with passenger numbers up 9% in January and 4.4% in February. For most of the last two years international traffic has been growing faster than domestic traffic. Notable new international services to have started in 2011 include Qantas replacing its San Francisco service with a new direct service to Dallas/Ft Worth, Malaysia Airlines from Kota Kinabalu to Perth, Hainan Airlines from Hangzhou to Sydney (via Shenzhen), Strategic Airlines’ Melbourne and Brisbane routes to Phuket, Royal Brunei starting non-stop flights to Melbourne, and V Australia from Sydney to Abu Dhabi.

Only Qantas has more than 10% share of international traffic

Latest figures from the Australian government show that Qantas continues to be the airline with more than 10% of international passengers, though its share is still below 20%. However,  when combined with its low-cost subsidiary Jetstar, the Qantas group of airlines manages to grab around a quarter of the passenger market. 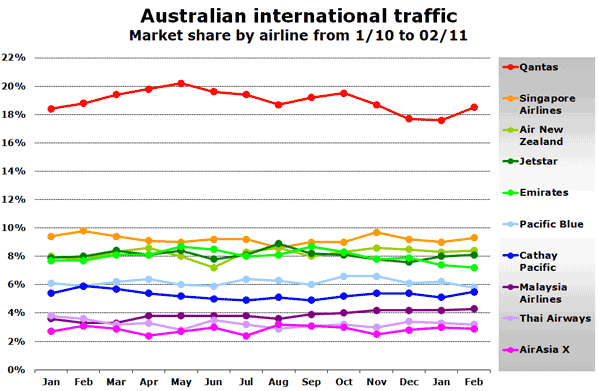