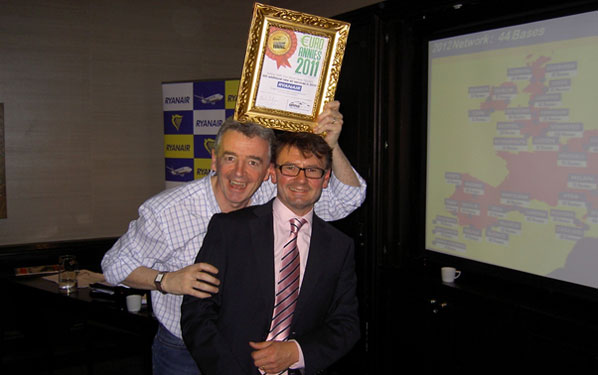 Ryanair’s CEO Michael O’Leary received the EURO ANNIE “Airline With The Most New Routes” from anna.aero’s publisher Paul J. Hogan for starting 320 routes in the 12 months to August 2011 (for a net gain of about 160). “This is the best thing I have won,” said MOL, a man noted for never exaggerating or making sweeping generalisations about anything.

Where were you when it happened? Is the Ryanair business model changing forever? The latest results show costs/fares are going up, demand is slowing down, and they could just possibly be running out of airports to subsidise them.

Certainly, the list of upcoming new routes on Ryanair’s website is probably the shortest we can remember – and would be a lot smaller if you took out all the Venice Marco Polo routes, which are only there because Venice Treviso Airport is closing for four months for runway repairs. Take these out and you’re left with just 28 new routes announced so far for the rest of the year.

There were other signs when anna.aero went along to see Michael O’Leary present Ryanair’s full-year results on Monday and give him his EURO ANNIE: 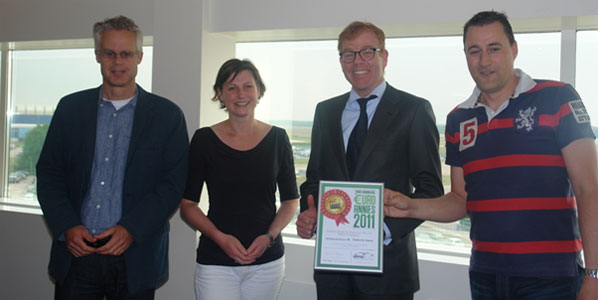 But while analysts and journalists looked for concerning news in this revolutionary and rich airline’s eventual/temporary maturation, there continues to be significant growth, wealth, and retained-cash relative to the industry, and MOL said he’d be “disappointed if the airline will not launch 6-10 more bases in a year’s time”, leaving it with 50+ bases.

Hinting at where these bases would be, MOL suggested one each in Spain and Italy, a second base in Central/Eastern Europe (other than Kaunas), “somewhere” in North Africa, “somewhere” in Scandinavia and also “somewhere” in the UK (in spite of capacity cuts also taking place in the country). There will not be new bases launched in Germany or France. 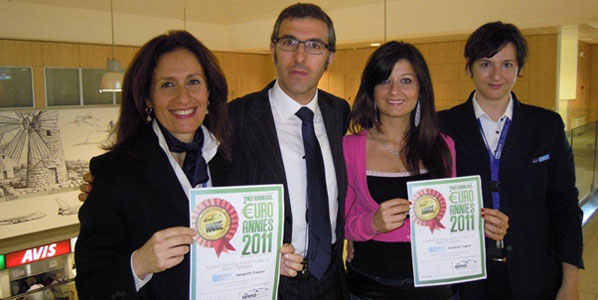 With the last 737-800s coming to Ryanair in 2012, there will be a period of reduced growth to maximise dividends 2012-2015, meaning that the next new aircraft will be needed in the 2016-2017 timeframe. O’Leary says they have talked to Airbus “but they don’t think we’re credible because they think we’ll use the negotiations to beat down Boeing”, although he maintains “if they undercut Boeing by 10% we’ll buy all the Airbuses going”.

Meanwhile, discussions have also taken place with Russian and Chinese manufacturers – although it is hard to see how a per-passenger cost of €6.40 for aircraft ownership and upkeep could be maintained, unless Ryanair starts getting its planes for free, along with some of its airports.

Celebrating a team effort: Kaunas (Lithuania), Ryanair’s only base in Central and Eastern Europe (although not for long), won the EURO ANNIE for growth in the airport under 1 million passengers category as traffic rocketed by 77% to 810,000 passengers. Not surprisingly, Ryanair was again instrumental in this, after the airport became a designated base in May 2010 with a raft of new routes to the likes of Berlin, Brussels, Edinburgh, London, Milan, Oslo and Paris.

The prize-winning Kaunas team are: