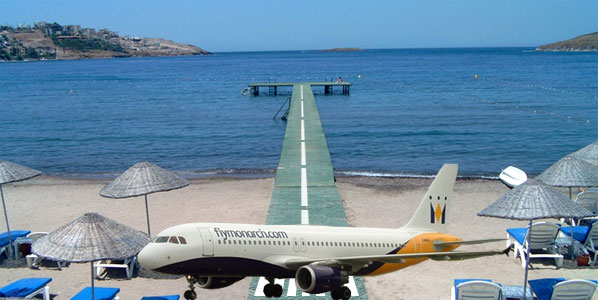 Yalikavak Beach – ‘the St Tropez of Bodrum’ – Monarch started operating there from London Gatwick and Birmingham this week after its first scheduled services landed in Turkey in 2010. ‘Sunny’ destinations dominate Monarch’s schedules, as a result traffic is over three times higher in summer than during winter.

London Luton based Monarch Airlines has seen its business model alter significantly during the last decade. In 2000, only 10% of its passengers were carried on scheduled services, but by 2006, scheduled passengers outnumbered charter passengers for the first time and by 2010, 64% of all the airline’s passengers were transported on its scheduled services. Like another well-established hybrid carrier (Transavia.com in the Netherlands), the airline has grown relatively slowly during the last decade with passenger numbers falling in both 2009 and 2010 in line with passenger numbers at UK airports as a whole. Average annual load factors for the airline have consistently been between 80% and 90%, peaking in 2001 at 89.6%. 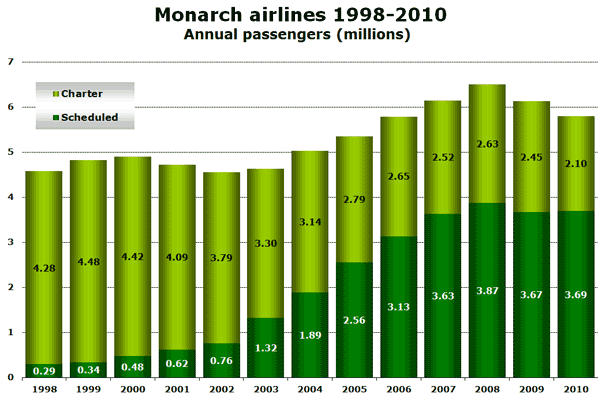 The focus of the airline’s scheduled route network, operated by around 20 narrowbody Airbus aircraft from its four bases at Birmingham, London Gatwick, London Luton and Manchester, are Mediterranean coastal destinations that appeal to holidaymakers in search of sun, sand and relaxation. The downside of this is that demand for these services is extremely seasonal. As a result, passenger numbers in the peak summer months are over three times higher than those achieved during the off-peak winter months. 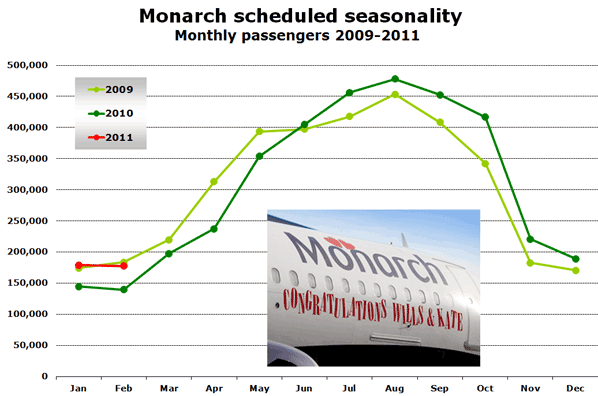 Based on OAG data for the first week in August, Manchester (MAN) is the airline’s biggest base for scheduled services with over 120 weekly departures, ahead of London Gatwick (LGW), London Luton (LTN) and Birmingham (BHX). The airline’s 11 Spanish destinations account for two-thirds of the airline’s scheduled flights, followed by Portugal (Faro), Cyprus and Turkey.

In terms of individual destinations, Malaga just edges Alicante, Palma de Mallorca, Faro and Tenerife. Scheduled flights to Turkey only started in 2010, while Corfu has this year become the airline’s first scheduled destination in Greece. Other destinations served in the past with scheduled services include Granada, Jerez, Madrid and Naples.

Charter flights to Africa and Caribbean

Other destinations served by Monarch’s charter flights include Chania (Greece), Luxor (Egypt), Mombasa (Kenya), Sharm El-Sheikh, and Trinidad & Tobago. Most of these routes operate using the airline’s widebody fleet of A330s equipped with 374 seats. Monarch has placed a firm order for six Boeing 787s with options on four more. The first of these is currently expected to be delivered in 2013.