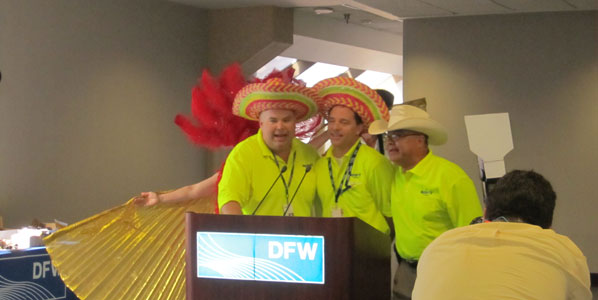 As of this month, Spirit Airlines serves Dallas/Fort Worth from both Fort Lauderdale and Las Vegas. These are two of the dozen routes already launched by the ultra low cost carrier this year.

Spirit Airlines, the self-proclaimed Ultra Low Cost Carrier (ULCC) based in Florida, recently confirmed plans for an IPO. Information submitted by the airline last September to the US Securities and Exchange Commission shows how the airline has evolved during the last five years. Between 2005 and 2009:

Results shown for the first half of 2010 showed passenger numbers were growing once more and that the fleet had grown to 31 aircraft. Since then Airbus has delivered additional new A320s to the carrier in September 2010 and January 2011, and two in February 2011, bringing the fleet size to 35 aircraft. Despite this according to OAG data for May 2011 the airline has just a 0.95% share of US domestic seat capacity ranking it 12th, between Hawaiian Airlines (1.12%) and Virgin America (0.68%). In terms of flights it has just 0.6% of the US domestic market.

Fort Lauderdale is biggest base with many international flights

Fort Lauderdale in Florida is the airline’s biggest base of operations with flights to over 40 destinations, including 23 outside of the US. Nearly all of the airline’s other US airports are served with just domestic flights. 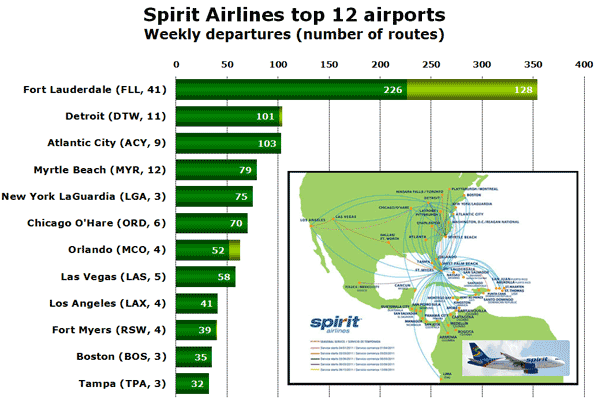 Over a dozen new domestic routes already launched in 2011

Since the start of the year, Spirit Airlines has added over a dozen new domestic routes.

The SEC submission also gave an insight into where the airline sees future network growth opportunities.

Profitably Expand Our Network in Attractive Caribbean, Latin American and U.S. Domestic Markets. We anticipate further penetrating attractive international and domestic markets currently underserved by low-cost carriers by increasing frequency and aircraft capacity on our existing routes, as well as by starting new routes to cities we do not yet serve. We believe we can accomplish this by: