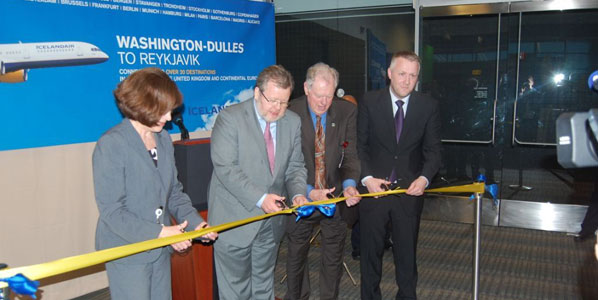 Analysis by anna.aero of data supplied by airlines to OAG indicates that this summer seat capacity from US airports to the UK will exceed seat capacity to Mexican airports, although both country markets still lag some way behind neighbouring Canada. A ranking of the top 12 country markets from US airports as a whole for this summer also shows that apart from the UK and Mexico swopping places, South Korea has jumped three places from 12th to 9th, while Spain has risen two places from 14th to 12th. 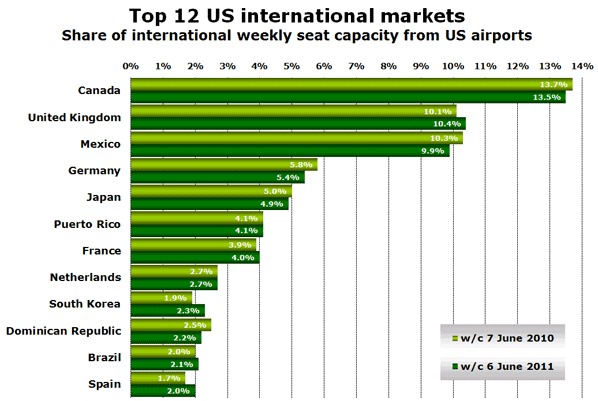 The US to South Korea market has seen year-on-year seat capacity rise by 24% and the number of flights grow by 22%, but nearly all of this has been achieved by increases in frequencies on existing routes between Seoul Incheon and various US gateways. The only new service between the two countries was introduced on 12 January this year when Hawaiian Airlines began operating four times weekly from Honolulu to Seoul.

Spain replaces Italy in the top 12 of US country markets thanks to seat capacity growing by 17%, helped by the introduction of three new routes. At the start of the summer season Iberia began flying non-stop between Barcelona and Miami, as well as between Madrid and Los Angeles. Last week saw the launch of seasonal US Airways services from Charlotte to Madrid. In addition American Airlines has added frequencies (and hence capacity) on its services between New York JFK and Barcelona, and between Miami and Madrid. 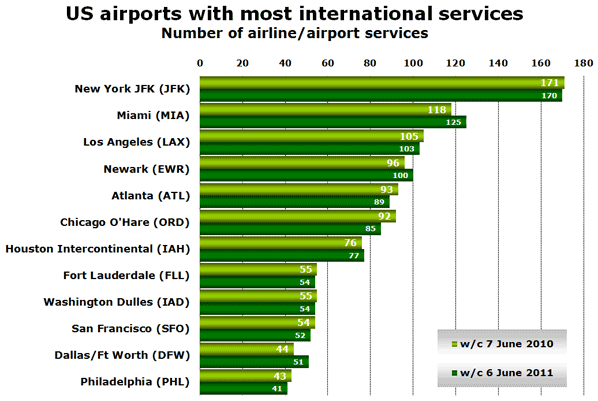 New York’s JFK airport is the clear winner in these rankings with 170 international services to 103 international destinations. Of these, 58 destinations are served by just one carrier, and 28 destinations by two carriers. That leaves 17 destinations served by three or more carriers with London Heathrow leading the way with five (American Airlines, British Airways, Delta, Virgin Atlantic and Kuwait Airways). Paris CDG, Madrid and Tokyo Narita are all served by four airlines from JFK.

Although the rankings of the top 12 US airports for international services remained unchanged, eleventh-placed Dallas/Ft Worth is closing fast on the airports above thanks to a net gain of seven new international services. American Airlines began flights to Barbados and Rio de Janeiro last December, followed by Queretaro and Veracruz (both in Mexico) back in February. From 9 June two more destinations in Mexico will be added; Mazatlan and Morelia will both be served daily by American Eagle Airlines using regional jets.

Last week saw the introduction of flights to Sydney with American Airlines’ oneworld partner Qantas, with the outbound flight making a stop in Brisbane. The only international service lost during the last year was Mexicana’s double-daily flights to Mexico City, but the airport is still served by American Airlines which has increased service from four to five daily flights.