Sweden – Lithuania market grows by 700% in a year! 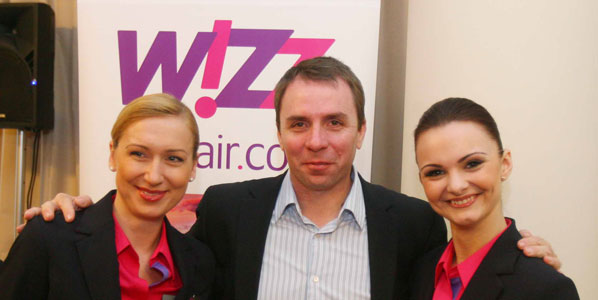 April: Wizz Air’s CEO Jozsef Varadi launches the Vilnius base, including a twice-weekly Stockholm Skavsta service. When the route was axed by Skyways less than a year ago, it left Lithuania and Sweden without a single link across the Baltic, but when the airline returns next week, it will become the third carrier on the revitalised route.

This time last year, the only airline operating scheduled services between Sweden and Lithuania was Skyways, the Swedish regional carrier, which flew five-times weekly between Stockholm Arlanda and Vilnius, offering 250 weekly one-way seats. Since then, there have been a surprisingly high number of developments:

So, by mid-June, there will four different options for passengers wishing to travel between Sweden and Lithuania, involving three different airlines (not including airBaltic who are only codeshare partners), and three different airport pairs. The number of weekly one-way seats will be 2,092, an increase of over 700% on the 250 seats available in June 2010.

Looking further back into OAG schedule data reveals that in the summer of 2007, airBaltic was the only carrier in the market, operating double-daily flights between Stockholm Arlanda and Vilnius. By the summer of 2008, they were joined by flyLAL (on 16 June 2008) who offered three weekly flights between the same two airports. Then airBaltic fell out with Vilnius Airport and flyLAL went bust, encouraging Skyways to enter the market on 31 May 2009 with double-daily Fokker 50 flights, which were cut back to daily flights by last summer.