Like Australia, Brazil and Canada, the capital of Switzerland is not one of the country’s two major cities. Bern has been overshadowed internationally for many years by Geneva and Zurich and the airport that serves it (Bern-Belp Airport) has in recent years handled no more than around 100,000 passengers annually. This looks set to change in 2011 with the growth of Bern-based SkyWork, a company which can trace its origins back to 1983 when it opened as a flight training school. In 2003, the company acquired its first Dornier 328, a 31-seat turboprop aircraft, and its first scheduled flights was performed in 2009, to Rotterdam. 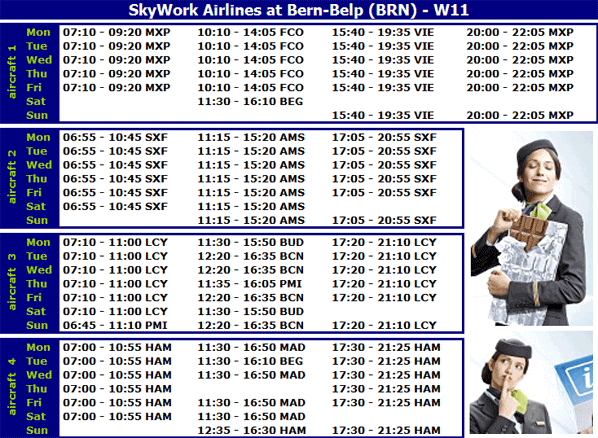 Services to Barcelona, Berlin and Hamburg were added last year, with London City flights starting at the beginning of the current summer season. After initially being operated with Dornier 328, it was quickly replaced with the airline’s larger Q400 aircraft. Seasonal destinations to Elba and Ibiza began operating weekly on 7 May and 24 May respectively. This summer, the airline’s fleet comprises one Q400 and two Dornier 328s.

For this winter, the airline’s fleet will expand to four aircraft and seven new routes are planned to Milan Malpensa, Rome Fiumicino and Vienna (all starting on 5 September), followed by Amsterdam, Belgrade, Budapest and Madrid at the end of October. A summary of this winter’s proposed network is shown in the following table.