It’s not so much that India is a market of 1.2 billion, but that its middle class – those with the wealth and spending habits comparable to American or European citizens (and therefore able to buy air travel for instance) now exceeds 60 million. That’s the same size as a country like France…and indeed the French and Indian airport traffic is now roughly the same size.

Latest data from the Airports Authority of India (AAI) shows that India’s airports handled 143.4 million passengers in the 12 month period ending in March 2011. That figure is similar to the number of passengers handled at all airports in France in 2010. However, it is a long way short of the 564 million passengers handled at China’s airports, suggesting that if the Indian economy continues to grow, air travel demand will likely develop at an impressive rate for many years to come. 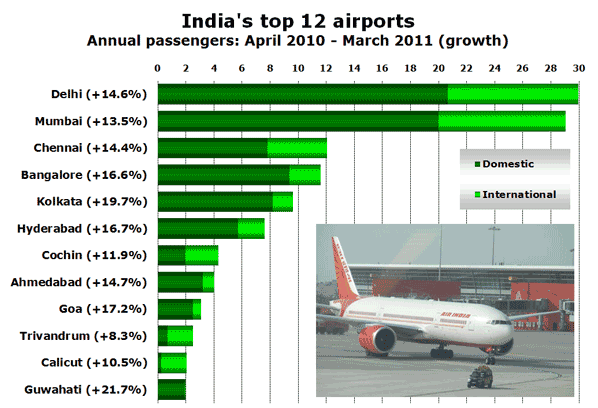 Delhi and Mumbai are the two dominant airports (and cities) in India with both handling almost 30 million passengers last year. Between the two, they account for just over 40% of all passenger movements through Indian airports. Growth was spread fairly evenly across the country with 11 of the top 12 airports all reporting double-digit, but only one (Guwahati) growing at more than 20%. In recent years, new airports have been opened to serve Bangalore (May 2008) and Hyderabad (March 2008), while Delhi opened an impressive new terminal last year.

India’s airlines are also increasingly taking their place on the world stage. At some point in 2012, Kingfisher should officially become a member of the oneworld alliance, while Air India has been struggling to meet various conditions to join Star Alliance. According to Indian press reports, rival Jet Airways may also be invited to join Star Alliance, while Air India has been set a deadline of 31 July or face having its invitation withdrawn.

In the highly competitive domestic market, Kingfisher and IndiGo both had 20% of the market in April, followed by Jet Airways (17.5%), Air India (15.4%) and Spicejet (13.6%). JetLite has a further 7.3% (giving the Jet Airways group of airlines 25% of the market) and GoAir has 6.4%. On India’s biggest domestic route between Delhi and Mumbai, there are over 400 weekly departures spread across all seven carriers with each operating between three and 13 daily departures.

Indian carriers have less than 40% of key Middle East market

The biggest region for international traffic is the Middle East. Analysis of schedule data shows that Dubai is by far the leading destination (three times bigger than Sharjah, based on seat capacity), served non-stop from 17 airports across India. Emirates is the dominant airline between Dubai and India, followed by Air India Express. 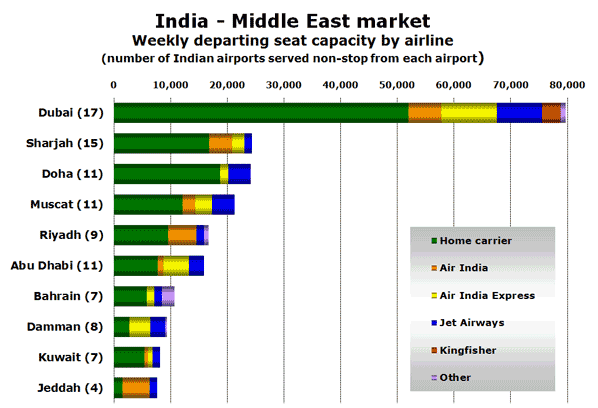 Sharjah is connected non-stop to 15 airports in India, thanks primarily to Air Arabia that serves 13 destinations in India from its base. The other regional ‘mega-hubs’ of Abu Dhabi and Doha rank sixth and third respectively for capacity to India. Muscat in Oman ranks fourth thanks to Oman Air serving 10 Indian airports non-stop, while Air India, Air India Express and Jet Airways also operate non-stop services between the two countries.

Indian carriers also have less than 40% of Western European market

This summer, a total of 11 destinations in Western Europe are connected to India with non-stop services, with London Heathrow having by far the most capacity, although Frankfurt offers more non-stop destinations. 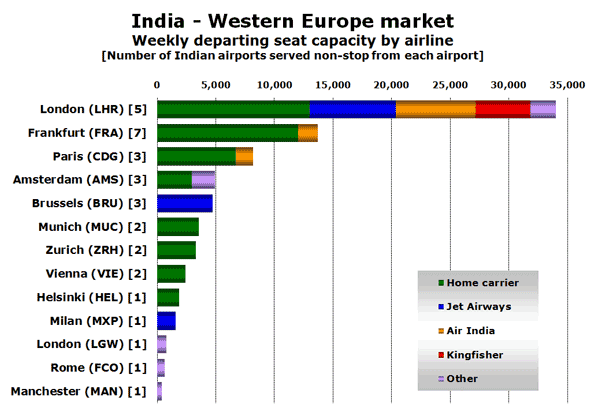 Looking at schedule data for August, Indian carriers have less than 40% of all international seat capacity from Indian airports, with Jet Airways leading the way with 14%, Air India with 11% and Air India Express with 6.3%. Kingfisher has just 4%, while Spicejet has around 0.5% thanks to operating just two routes from Delhi to Kathmandu and from Chennai to Colombo.

Not content with being the world centre of cricket (thanks to the Indian Premier League, and the fact that India recently won the one-day World Cup and are the top-ranked Test playing nation), India now has a growing presence in motor sport. Kingfisher owner Dr Vijay Mallya runs the Force India F1 team, Narain Karthikeyan drives for the Hispania Racing Team (HRT) and later this year India will host its first ever Grand Prix at a new circuit near Delhi, although the precise date has still to be finalised.