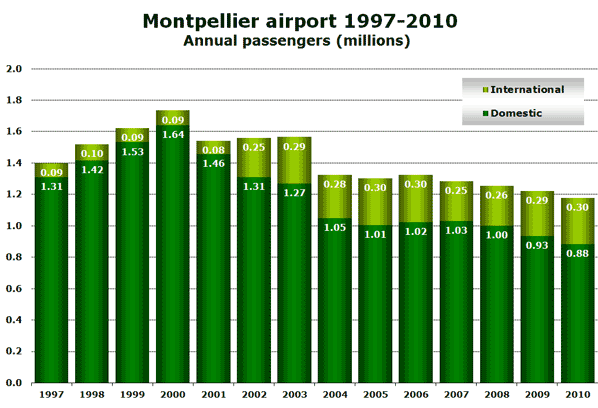 With such a strong focus on domestic routes (apart from Paris, Air France also serves Lyon and Nantes with daily flights), the airport’s seasonality profile is not as extreme as might be expected for an airport that lies on the Mediterranean coast. Traffic peaks in July at a level around 65% higher than in February. 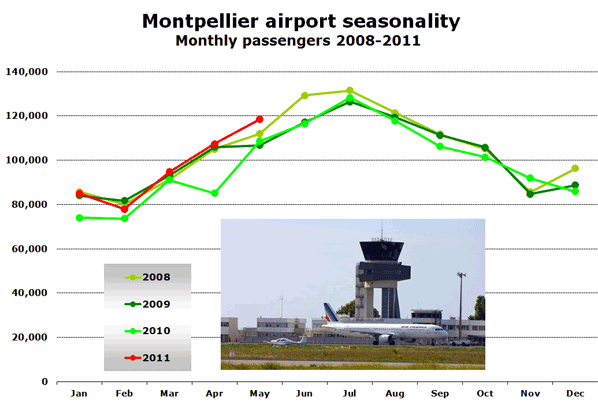 So far in 2011, the airport’s traffic numbers are above those achieved in 2010, suggesting that annual passenger numbers may be close to 1.4 million once again. Since the beginning of the year, the airport has welcomed new services from Birmingham (with Ryanair since 13 April) and Rotterdam (with Transavia.com since 22 April). The Rotterdam service replaces the previously operated Amsterdam service. In addition, bmibaby begins seasonal scheduled services from Manchester at the beginning of July to complement existing UK services offered by easyJet (to London Gatwick and London Luton) and Ryanair’s flights to Leeds/Bradford. Ryanair also serves Montpellier from its bases at Brussels Charleroi and Frankfurt Hahn.

In August, Air France (courtesy of Brit Air) will operate three weekly flights (Monday, Wednesday, Saturday) between Montpellier and Strasbourg using a mix of CRJ700s and CRJ200s. The route was last served by Air Littoral in 2004.

Apart from Air France, the only other European flag-carrier present at the airport is Iberia, which offers three weekly flights to Madrid, while Air Algerie offers weekly flights to Algiers. Air Arabia Maroc operates to several Moroccan destinations at various times of the year.