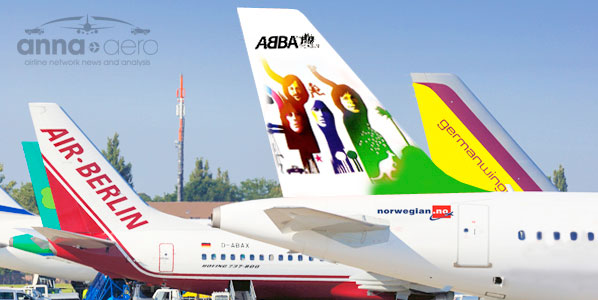 Oh look – there’s that cunning fake “famous ABBA” Norwegian tail again. Norwegian joined the ranks of airlines operating Stockholm-Berlin this month and the cost of a fare got more competitive – and complex. Despite the muddle of fees, as might be expected, the cheapest is Ryanair, followed by Norwegian, germanwings, airberlin, then SAS.

As of this week, passengers wishing to travel between the capitals of Germany and Sweden now have a choice of five different airlines and three different airport-pairs to choose from. Norwegian became the latest carrier to join the market, which already comprised SAS, airberlin, germanwings and Ryanair.

For this week’s fare analysis, one-way fares were collected on 7 June for flights departing between 8 June and 31 July for all five airlines. Two of the five carriers (airberlin and SAS)  operate multiple daily flights on some days, so only the cheapest fare was used for each day of departure. Fares were only collected for flights from Berlin to Stockholm.

The fares shown in the graphs below are the cheapest possible all-inclusive fares. However, depending on payment option, baggage requirements and seating preference, the one-way fares for all of these carriers (except SAS) can be considerably higher. These additional fees are summarised at the end of this article. 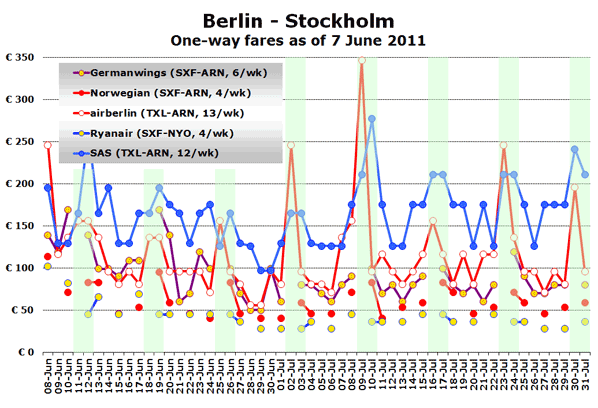 Across the 54 days, Ryanair’s average daily fare from Berlin to Stockholm is around €43. The next cheapest is Norwegian at €61, followed by germanwings at €90. airberlin’s cheapest one-way fare averages €118, while SAS (which promotes the fact that there are ‘no hidden taxes’) averages €164.

The fares illustrated in the above graphs are the cheapest achievable, but in the case of all airlines except for SAS, it requires passengers to have no hold baggage and to pay by means that not many people do. The table below summarises the additional costs of booking the one-way flights with germanwings, Norwegian and Ryanair depending on hold baggage needs, payment option and seating preference.

Ryanair’s bag fee is steep enough that if you do want to take some hold luggage, Norwegian is now around the same cost as Ryanair. airberlin appears to charge a flat “service fee” of €10, which may increase to €17 depending on the passenger’s choice of payment option. This service fee is waived if a customer has Gold Status in the airline’s “topbonus” frequent flyer programme. As befits an airline that is shortly to join the oneworld alliance, there is no charge for assigned seating and passengers are allowed one piece of hold luggage weighing up to 20kg free of charge.

Another factor that may need to be taken into account is in-flight food and drink. Again, airberlin and SAS offer a range of free non-alcoholic drinks and food items such as sandwiches, while all such items on the other carriers need to be paid for. Passengers wishing to collect points on frequent flyer programmes may also wish to consider this factor when determining their choice of airline, as well as schedule quality and which days of the week they need to travel. So in the end, each passenger will weigh up the different trade-offs of time, cost, comfort and convenience for each airline and make their own decision.