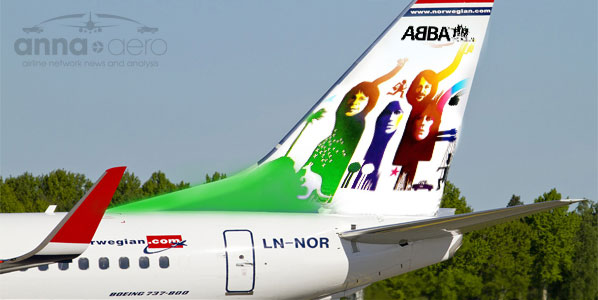 Now that the Swedish market is so significant, we did ask Norwegian why its fleet does not have a tailfin in honour of ABBA and the simple reason is that you have to be dead; mere fame and commercial success is not enough. (ABBA Gold, the compilation album, has sold 28 million copies, Norwegian flew 13 million passengers last year.)

Transporting 13 million passengers on a fleet of over 50 737s in 2010 makes Norwegian Air Shuttle (better known by its brand name of simply Norwegian) Europe’s third-largest LCC after Ryanair and easyJet. Operating almost 250 routes in 2010 between nearly 100 airports, the Oslo-based carrier has doubled passenger numbers in just over three years. One of the key factors in generating such rapid growth was the decision, announced in April 2007, that it would acquire FlyNordic, a low-cost airline owned by Finnair, based at Stockholm’s Arlanda Airport that operated several MD82s/MD83s. The following year the airline was re-branded as Norwegian.se before becoming simply Norwegian(.com) as the MD80-series aircraft were phased out in favour of various 737 types.

Since then, the Stockholm-based network has grown from around 20 destinations in the summer of 2008 to over 30 this summer while capacity has almost trebled. The last week has seen the launch of new international routes to Berlin and Prague, and a new domestic route to Visby.

According to OAG schedule data for this June, Stockholm Arlanda is Norwegian’s second-biggest base (after Oslo) with almost 300 weekly departures to over 30 destinations. While SAS has around a 40% share of Stockholm Arlanda’s seat capacity (currently serving 42 destinations non-stop), Norwegian ranks second with a 20% share, well ahead of third-placed Lufthansa with just 5%. 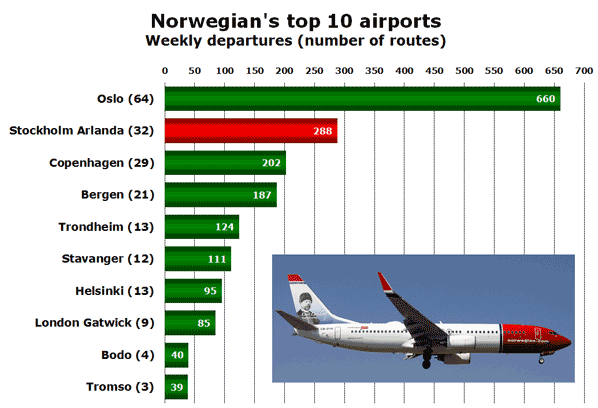 Apart from this week’s new route launches, the carrier will also begin weekly, seasonal flights to Tel Aviv and Venice from the end of June. Over 75% of Norwegian’s flights at Stockholm Arlanda are assigned to just eight key routes on which the carrier faces stiff competition from SAS on all routes as well as Blue1, Finnair and British Airways on flights to Helsinki and London.

One of the distinctive features of Norwegian is that many aircraft have their own unique tailfin depicting a famous person. Initially, when the airline only had a base in Norway, this was restricted to famous Norwegians, but with the creation of bases across the Nordic countries, the airline has now also embraced famous people from its new home countries as well. Famous Scandinavians honoured include Henrik Ibsen, Roald Amundsen, Edvard Munch, Edvard Grieg, Hans Christian Andersen and Greta Garbo. However, no aircraft has yet been honoured with the image of the members of Sweden’s biggest musical export ABBA. Here at anna.aero, we hope it’s only a matter of time.