Portugal benefiting from not being in North Africa; in-bound traffic still growing Back in October 2009 when we last took a look at the Portuguese market, passenger numbers for the year were below the levels of 2008. However, since then, passenger demand has recovered; notwithstanding Portugal’s current economic difficulties, it is still attracting plenty of inbound tourists who may be thinking twice about a similar holiday in North Africa this year. In fact, last year, passenger numbers at Portugal’s three busiest airports (Lisbon, Faro and Porto) were up just over 8%. 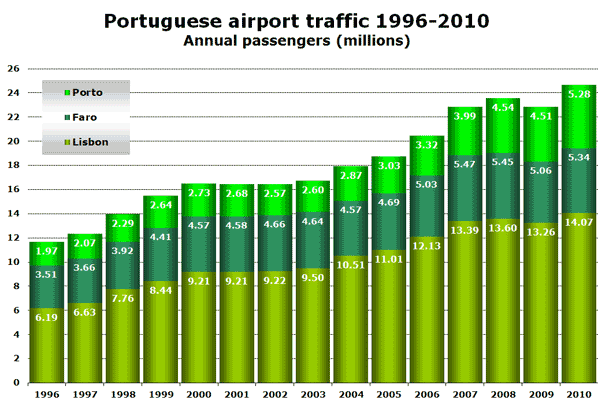 The first quarter of 2011 continued to see demand grow by just under 6% across these three major airports, with April figures benefitting from comparison with last year’s volcano-impacted numbers. 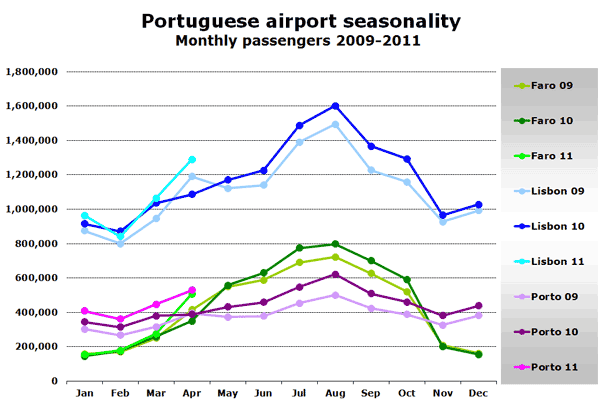 It seems likely that Porto will pass Faro to become the country’s second-busiest airport this year. Last year, Faro (5.34 million) was still just ahead of Porto (5.28 million), but Porto’s higher growth rates so far in 2011 suggest the rankings may be reversed this year. Porto continues to benefit from being a Ryanair base and the Irish carrier has started 15 new routes since the beginning of January 2010. Since the beginning of this year, new services to La Rochelle, Paris Vatry and Rome Ciampino have been added by Ryanair. According to AEA statistics, TAP Portugal reported a 7.5% increase in scheduled passenger numbers last year to just under nine million, while at the same time improving its annual load factor by 6.2 percentage points to 74.2%. At the end of May, the airline started flying to Vienna (last served in 2000), while in June it is starting new routes to Athens (last served in 1998), Dubrovnik, Manchester (last served in 1993), Miami, Porto Alegre and Sao Vicente. This will result in the national carrier operating non-stop flights to 76 destinations this summer, and accounting for around 60% of scheduled seat capacity at Lisbon Airport. The government appears to be considering selling TAP Portugal, with IAG (owners of British Airways and Iberia) believed to be interested in acquiring the carrier.

Since the beginning of 2010, new services to Lisbon have been added by Cimber Sterling (to Copenhagen), easyJet (to Barcelona, Edinburgh, Toulouse), Lufthansa (to Düsseldorf), TAP Portugal (to Accra, Algiers, Bordeaux, Campinas Viracopos, Düsseldorf, Marrakech) and Transavia.com (to Amsterdam). easyJet has already announced that it will make Lisbon a designated base this winter. It already operates flights to 16 destinations this summer, having most recently added daily flights to Barcelona at the end of October. Next summer will see the start of flights from Birmingham to Lisbon operated by bmibaby. While no decent route launch is complete without a cake, this year's must-have accessory for a new service is the flash mob which TAP spontaneously organised in the South Terminal. Meanwhile, a more formal welcome took place at the gate by a delegation led by Bill Talbert, President and CEO Greater Miami Convention and Visitors Bureau; Nuno Brito, Portuguese Ambassador to the US; José Abreu, Miami-Dade Aviation Director; and Carlos Paneiro, TAP Portugal’s VP Sales.