UK airports report growth of less than 1% in Q1; London, Scotland and Leeds/Bradford performing above average 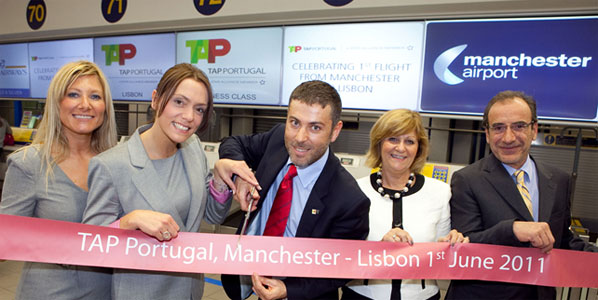 A good start to June in Manchester as TAP Portugal landed. Generally there was more disappointing (but interesting) traffic results for UK airports in the first quarter: Good news for Scotland (except Prestwick), London (except Stansted) and Leeds/Bradford.

Passenger demand at UK airports in the first quarter of 2011 has grown by 0.4%, according to statistics provided by the UK CAA. In January passenger numbers were up a healthy 4.0%, but in February they were down 0.8%, and also down 1.6% in March. Figures for April show a misleading year-on-year growth of over 30%, but that reflects the fact that UK airspace was closed for several days last April as a result of the Icelandic ash cloud.

Analysis across the various UK regions reveals that some airports are performing significantly better than others. 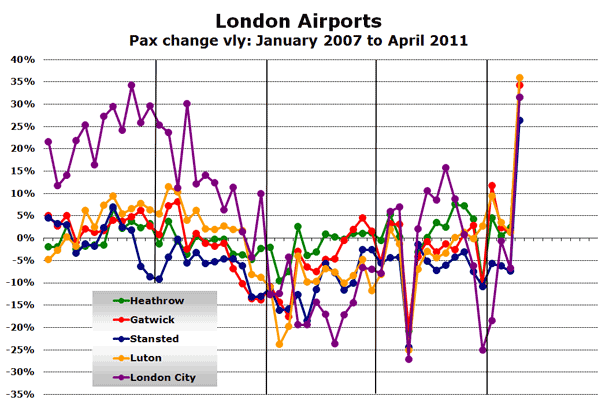 London’s Gatwick, Heathrow and Luton airports all reported growth in each of the first three months of 2011 while Stansted and London City both saw passenger numbers fall in each of those months. 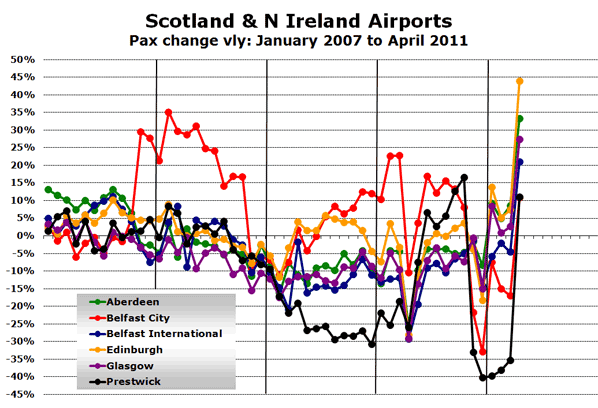 Aberdeen, Edinburgh and Glasgow International have all had good first quarters with consistent growth, while both Belfast airports have reported a decline in passenger numbers. Glasgow’s Prestwick airport has seen demand fall by between 35% and 40% in each of the first three months of 2011. 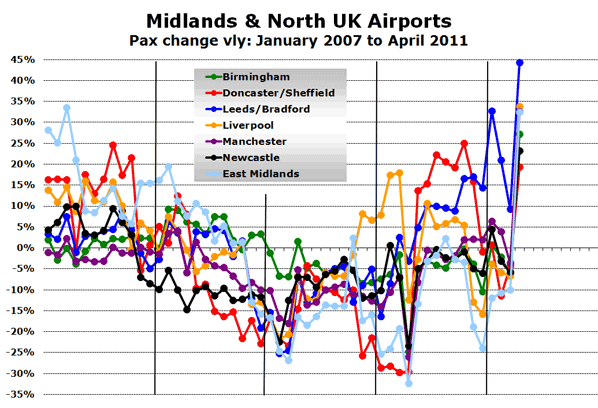 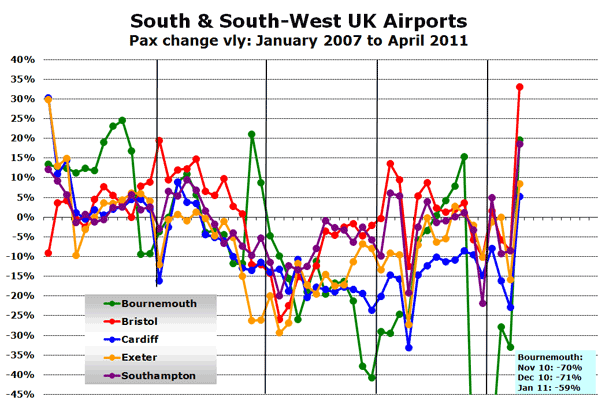 It has been a particularly poor first quarter for airports in the south and south-west of the UK. None of the five airports tracked reported growth in February or March while only Bristol and Southampton managed modest growth in January. While UK airports as a whole reported growth of 30% in April (because of comparison with last year’s artificially deflated figures) Cardiff Airport in Wales could only manage 5% growth in April. Bournemouth’s extreme passenger declines in November, December and January can be explained by Ryanair’s decision to cut significant capacity during the off-peak winter season.

In the 51 months between January 2007 and March 2011 London Stansted has reported year-on-year traffic declines in 44 of them, Glasgow International in 43, Newcastle in 39 and Cardiff in 37.