Which airports are benefiting most from Southwest’s 4% growth in 2011? Chicago Midway now bigger than Las Vegas If you luv someone, say it with cake: Newark became Southwest’s latest base at the end of March. This week, it added services to Baltimore/Washington, Denver, Houston/Hobby, and Phoenix, taking it to 122 weekly departures. Besides the smitten employees, the celebrations are joined by a grateful Newark Mayor, Cory Booker, Southwest’s CEO Gary Kelly, Bill Baroni, Deputy Executive Director, Port Authority of New York and New Jersey, and Chris Bollwage, Mayor of the City of Elizabeth.

Last year, the number of enplaned passengers on Southwest flights grew by 4.8% to an all-time high of 106.2 million. Revenue passengers grew by 2.2% to 88.2 million, indicating that a growing proportion of Southwest’s passengers are making connections with other Southwest flights. Airline capacity (as measures by ASMs – Available Seat Miles) grew by a paltry 0.4%, as the average load factor improved by 3.3 percentage points to 79.3%. With the average length of haul increasing from 863 miles to 885 miles, the number of aircraft trips performed actually fell by just under 1% to 1,114,451. 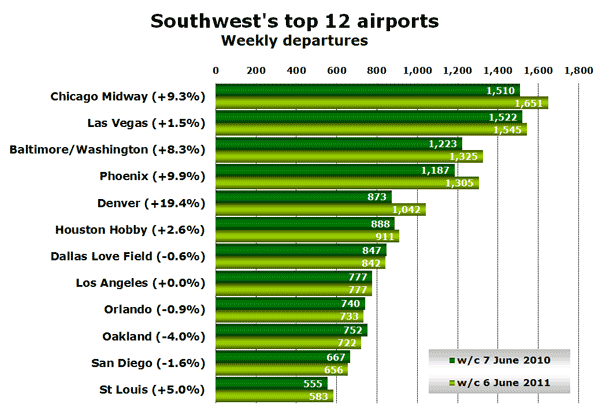 In the first quarter of 2011, the number of trips flown has grown by 4.6% and analysis of OAG schedule data for June 2011 versus 2010 suggests that Southwest’s planned growth for 2011 appears to be just over 4%.

Chicago Midway has now overtaken Las Vegas as the airline’s busiest airport in terms of weekly departures, with over 1,600. Four of Southwest’s top 12 airports are reporting a small reduction in frequencies this summer, while there is no change at Los Angeles. In percentage terms, Denver is the fastest-growing airport in the top 12 with flights up almost 20% versus a year ago.

Denver beats Chicago and Newark for most new flights

During the last 12 months, Southwest has added three new airports to its network, bringing the total to 72. Charleston and Greenville/Spartanburg (both in South Carolina) were added in early March, while Newark became the airline’s latest base when flights to Chicago Midway and St Louis began at the end of March. This week saw the airline add services from Newark to Baltimore/Washington, Denver, Houston Hobby and Phoenix, resulting in the airline now operating 122 weekly departures at the New Jersey airport. 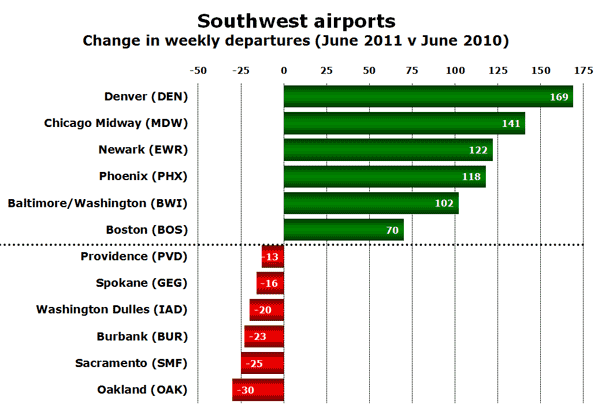 In the first week of June, Southwest is planning to operate some 23,500 departures, around 1,000 more than in the corresponding week last year. The majority of airports have seen an increase in weekly flights, but 27 airports have seen a small decrease. The biggest reduction in weekly flights has been seen at three airports in California; Oakland, Sacramento and Burbank. Despite this, across these three airports only one non-stop route (Oakland to Nashville) out of 36 has actually been dropped by the carrier.