Airbus delivers 50 aircraft in May including first A380 to Korean Air; Boeing to raise production of 737s 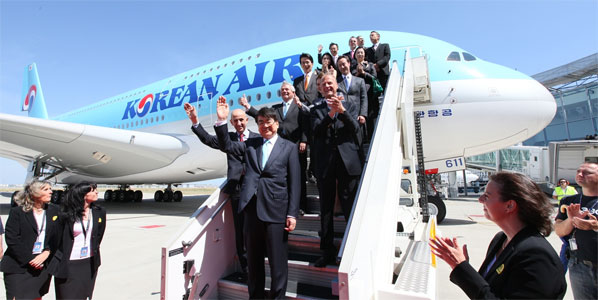 Korean Air became the next airline to operate the A380 after a big hand-over ceremony in Toulouse. For full video-coverage of the event, see the airline’s official YouTube video.

In May, for the second month in a row, Airbus delivered 11 more aircraft to customers than Boeing (50 versus 39) thus extending the European carrier’s lead over its US rival in the first five months of the year to 37. Boeing it seems has finally decided to respond by announcing last week that it would increase 737 production to 42 units per month in the first half of 2014. Currently Boeing produces 31.5 737s per month and plans to increase this to 35 in early 2012 and then to 38 per month in the second quarter of 2013. This follows Airbus’ announcement last month that it would increase production of its narrowbody A320-series aircraft to 42 per month by the end of 2012. 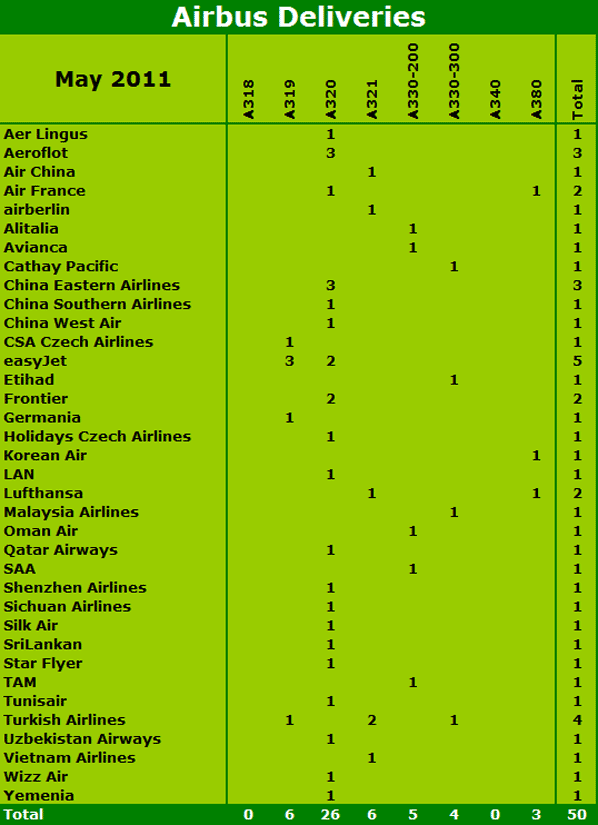 easyJet was again the biggest receiver of new Airbus aircraft in May, taking delivery of three A319s and two A320s, one of which became the airline’s 200th Airbus aircraft. Turkish Airlines received four new aircraft comprising three different types. Korean Air became the sixth carrier in the world to take delivery of an A380 (after Singapore Airlines, Qantas, Emirates, Air France and Lufthansa). 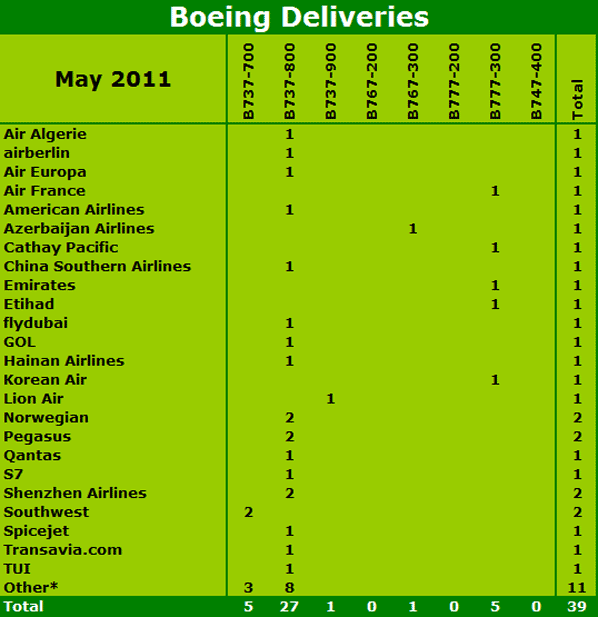 For the second month in a row Ryanair did not receive any new 737-800s, leaving it to other LCCs such as Norwegian, Pegasus Airlines and Southwest to each collect two new aircraft. Five 777s were delivered, one each to Air France (which is under political pressure to make its next aircraft order solely with Airbus), Cathay Pacific, Emirates, Etihad and Korean Air. One relative oddity was the delivery of a second 767-300 to Azerbaijan Airlines. It received its first of the type in June of last year.