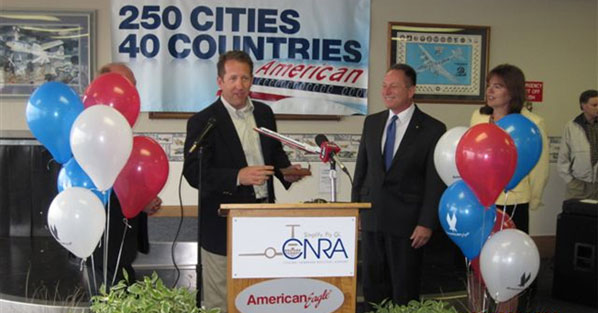 June 9 2011; Green Island, Central Nebraska Regional Airport. Congressman Adrian Smith sees off the inaugural flight of American Eagle to Dallas/Fort Worth. Besides boasting “250 cities in 40 countries” American Airlines is still growing but still almost 7% down on the traffic it was enjoying three years ago.

The latest data from the leading US carriers shows that all of them reported traffic (measured by system RPMs – Revenue Passenger Miles) growth in April, while two of them (Allegiant and United) report a year-on-year drop in traffic (RPM) in May, United by just 0.3%, Allegiant by a more significant 6.9%. After being briefly usurped by Alaska Airlines in April, Hawaiian Airlines once again reported the highest traffic (RPM) growth in May, the fifth time in six months that the airline has achieved this distinction. It should be noted that while Hawaiian Airlines’ RPMs grew by almost a quarter (24.8% to be precise), passenger numbers were up a more modest 7.7%, indicating a considerable increase in average sector length for the airline. 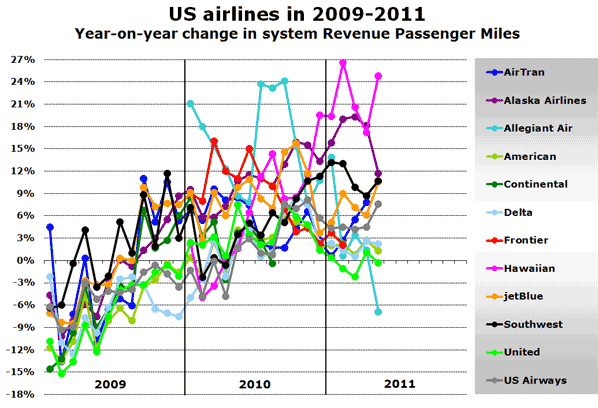 Alaska Airlines reported double-digit RPM growth for the thirteenth straight month, and were joined by both jetBlue and Southwest in recording an increase in RPMs of over 10% in May. Since officially being taken over by Southwest on 2 May, AirTran no longer reports figures separately but instead has them included in with Southwest. However, the figures presented here for Southwest do not include AirTran capacity.

A close look at the four remaining ‘legacy’ carriers (American, Delta, United, US Airways) shows that US Airways continues to be the only one currently generating significant growth. As the ‘new’ United continues to rationalise its network (RPMs were down 0.3% in May), American and Delta both reported RPM growth of less than 3% in March while US Airways grew by 7.6%, with domestic RPMs up 8%. American and United reported reductions in domestic RPMs in May, while at Delta the growth was a modest 1.9%.

Comparing May traffic data with that of three years ago (just before the economic recession took hold in the US) shows that while Alaska Airlines (+14.4%), jetBlue (+17.4%) and Southwest (+10.4%) have all now recovered to pre-recession levels, three of the four remaining legacy carriers have not. American (-6.9%), Delta (-5.2%) and United (-6.0%), look like they may have to wait at least one, maybe two years before returning to pre-recession levels. However, US Airways RPMs were up 4% in May compared with May 2008.

Nine of the 10 airlines for which data has been collected reported improved load factors in May compared with May 2010. The exception is Hawaiian Airlines where average monthly load factor was down one percentage point, but given that traffic (RPM) grew by almost 25% this seems fairly acceptable. 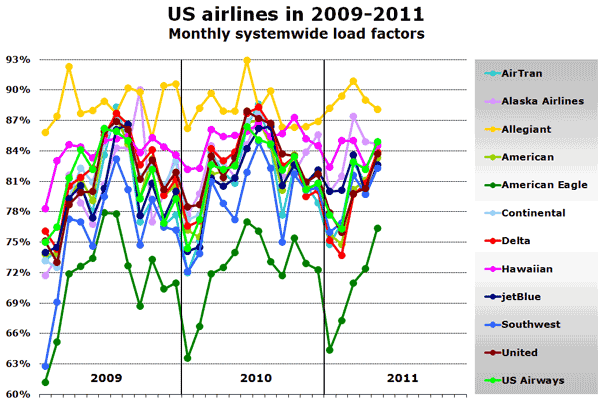 Allegiant remains the load factor champion achieving a figure of 88.1% in May, while Southwest reported an impressive five percentage point improvement from 77.2% to 82.3%. However, it still had the lowest load factors in April and May with the exception of American Eagle whose much smaller average aircraft size tends to make it hard to produce load factors comparable to the other airlines.