Earlier this month, Emirates launched a new TV advertising campaign across Europe, highlighting how its investment in the Airbus A380 is generating healthy, long-term employment across many countries. This strategy is being interpreted as something of a charm offensive in light of recent claims by several airlines that Emirates has unfair advantages and is ‘stealing’ traffic from European carriers. Lufthansa in particular has repeatedly encouraged the German government not to allow Emirates further access to German airports (such as Berlin and Stuttgart), although it curiously seems to have had fewer issues with Emirates rival Qatar Airways serving these destinations. 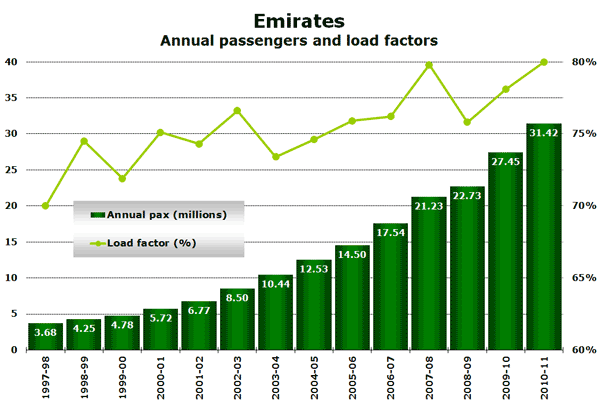 Emirates’ latest annual report shows that it carried over 31 million passengers during its last financial year (up almost 15%) at a record-high load factor of 80%, on a fleet of almost 150 all widebody aircraft. Since 1997, passenger numbers have grown every year by between 12% and 26% per annum with the exception of 2008-09 when traffic was up a modest 7%.

28% of capacity is allocated to Europe

Analysis of Emirates’ current network reveals that Europe is the airline’s second-biggest region for capacity (as measured by ASKs – Available Seat Kilometres), only just behind Asia. 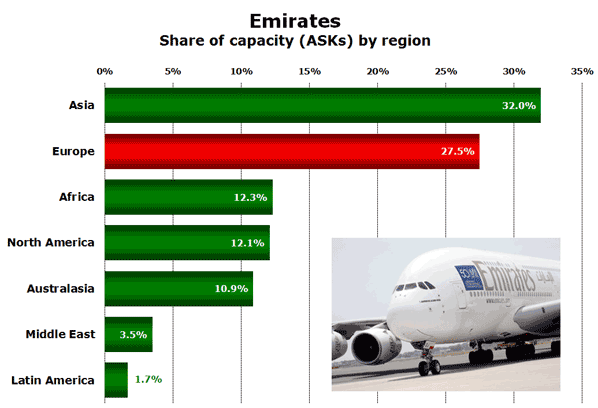 At present, the airline serves 25 European destinations with non-stop flights plus Malta, which is served via Larnaca. So far this year, it has added Geneva (earlier this month), while Copenhagen flights begin on 1 August, and the carrier recently revealed plans to serve St Petersburg in Russia from 1 November.

A look at a list of Europe’s top 50 airports (by passenger numbers in 2010) shows that by the end of the year, Emirates will have direct flights to 23 of them, including nine of the top 10. All three of Emirates’ new European routes in 2011 are Top 50 airports – Copenhagen is 15th, Geneva 33rd and St Petersburg 46th. The following table allocates the 27 Top 50 airports that Emirates does not currently serve into four different categories; those where it already serves an airport in the same city; airports that are predominantly ‘sunshine’ destinations rather than traffic generators; airports served by one or other (or both) of the other ‘MEB3’ carriers; and finally ‘city’ airports that are not served by any of the MEB3 airlines at present.

With a further 11 aircraft due to be delivered before the end of 2011, Emirates is likely to announce further new routes to add to its network of well over 100 global airports. If Emirates wants to grab first-mover advantage (over its MEB3 rivals) then Lisbon, Helsinki, Warsaw or Lyon would be most likely. German authorities are likely to block Cologne/Bonn, while Edinburgh may be too close to Glasgow (and Newcastle) to be considered viable.