Ryanair celebrated 10 years at Gothenburg City Airport this month with a cake. Having started with a single London Stansted route, Ryanair now serves Sweden’s second city with 14 routes. Low-cost airlines are, however, increasingly also discovering Gothenburg’s main airport Landvetter, which has welcomed both easyJet and Norwegian in the last year.

Gothenburg on Sweden’s west coast is one of the smallest cities in Europe to be served by two commercial airports. Last year, the two airports handled just under five million passengers between them, up 10% on the combined figure for 2009, but still below the peak of 5.14 million achieved in 2008. Gothenburg Landvetter Airport is used by most carriers, including low-cost carriers such as easyJet and Norwegian, while Gothenburg City Airport is used almost exclusively by the even lower-cost airlines Ryanair and Wizz Air. 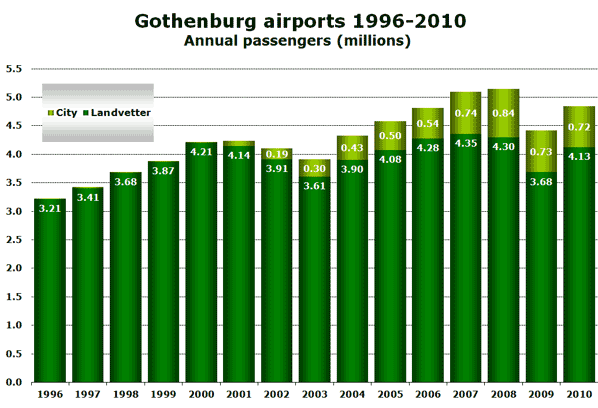 Passenger numbers in the first quarter of 2011 were up around 15% at Landvetter and 13% at City airport. In May, Landvetter’s figures were up by as much as 24%, suggesting that this year could be the busiest yet for both facilities.

Schedule data for this August shows that SAS is the leading airline at Landvetter with over 8,000 weekly departing seats, spread across just four routes; Copenhagen, London Heathrow, Stockholm Arlanda and a weekly flight to Split in Croatia. With the exception of during the holiday months of July and August, the airline also serves Frankfurt. Lufthansa operates three more flights per week than SAS, but uses smaller aircraft on its four German routes, each of which is operated at least daily, with Frankfurt served as often as five times per day.

City Airline serves the most destinations (15) and operates as many weekly flights as SAS but mostly with smaller Embraer regional jets. The airline recently bought by fellow Swedish regional carrier Skyways uses MD87s on its routes to Spain and Nice, but will come under pressure this summer from Norwegian, which is starting flights to Malaga, Nice and Palma this month and is launching Barcelona flights in August.

Apart from SAS, Lufthansa and KLM, other flag-carriers operating at the airport include Air France, Austrian Airlines, British Airways, Brussels Airlines, Finnair, Icelandair, Malev and Turkish Airlines. Other carriers operating at least daily flights include airberlin (to Berlin Tegel), easyJet (to London Gatwick and Manchester), and Widerøe (to Oslo).

Stockholm is #1 route; London set to grow strongly in 2011 According to Swedavia statistics, the leading routes in 2010 were Stockholm (944,000 passengers), Copenhagen (281,000), Frankfurt (274,000), Amsterdam (265,000) and London (165,000). The Stockholm route is set to grow further in 2011 since Norwegian started serving the market in mid-February. The London market is also likely to see considerable growth this year after British Airways started Heathrow services last November, following easyJet’s decision to launch Gatwick services in September.

One market likely to see a drop in passenger numbers is Berlin, as easyJet, which only started its flights from Berlin Schönefeld last November, is terminating the route at the end of June.

Ryanair is the dominant carrier at Gothenburg City Airport, although as elsewhere, its portfolio of routes appear to operate through a revolving door. Since last August, it has dropped routes to Hahn and Weeze in Germany, as well as Glasgow Prestwick, but has added new connections to Beauvais (Paris), Brussels Charleroi, Edinburgh, Kaunas and Rome Ciampino. Two weeks ago, the airline celebrated its 10th anniversary at the airport, having first started flying there from London Stansted on 1 June 2001. Since then, the airport has handled just over five million passengers, mostly on Ryanair flights. Wizz Air started serving Gothenburg City in June 2006 from Warsaw, followed three months later by flights from Budapest. Gdansk services were first introduced in March 2008 but were suspended at the beginning of last summer, before returning to the schedule in April of this year, along with an additional new service to Belgrade.

Next week (23-25 June), Gothenburg is hosting IATA’s 128th Schedules Conference at the Swedish Exhibition & Congress Centre. This is where airlines and airport slot coordinators meet to hammer out the details for next summer’s potential operations. The anna.aero team will be there as well producing two magazines reporting on events, so if you are a regular reader of anna.aero, please stop by and say hello. Chances are you will have your picture taken and appear in one of our publications, or even on the website itself.