The Icelandic low-cost carrier Iceland Express in the last week launched three new routes, one of which is to Chicago O’Hare. The airline’s CEO Matthías Imsland was on site to celebrate with the crew and passengers. This summer, the airline will serve four North American destinations.

Iceland’s low-cost airline added three new routes this week from its Keflavik base. Following the apparent successful launch of US flights to Newark last summer, the carrier has just introduced two further North American destinations; Boston (served four times weekly) and Chicago (served once weekly). In addition, the carrier has added a new European destination; Edinburgh in Scotland will be served twice weekly until the end of August. The airline’s aircraft (a mix of 218-seat 757-200s and 148-seat 737-700s) are all operated by UK-based Astraeus. 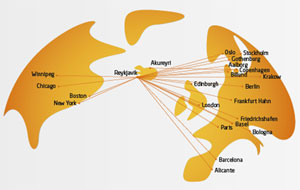 The airline’s summer season only operates from the beginning of June to the end of August (three months), while its winter season is defined as the remaining nine months (from September to May). In winter, the airline’s network is reduced to just seven routes (Alicante, Berlin, Copenhagen, Friedrichshafen, London Gatwick, New York and Orlando), but even then two of the routes (Alicante and Friedrichshafen) only operate for some of the period.

The majority of the airline’s routes are served with no more than three weekly flights. The exceptions this summer are Copenhagen and London Gatwick (both served twice daily), Newark (now served daily) and Boston (four flights per week).

A number of destinations that were apparently served last summer are not on the airline’s route map in 2011. These include Gdansk, Geneva, Luxembourg, Milan Bergamo and Rotterdam. Total traffic at Keflavik airport in 2010 was almost 1.8 million passengers, up almost 8% on 2009 despite the impact of the ash cloud last April when traffic was down 22%. Total traffic between Iceland and the key UK market (Source: UK CAA) was up 5% last year to 338,000 passengers. In the first quarter of 2011, Keflavik airport traffic was up 12.5%. In April, passenger numbers were up a massive 56%, while in May 160,240 passengers passed through the airport, up 28.4% on May 2010.